Tickets are now available for Cancer Bats at Rescue Rooms.

Proving that loud, gritty, and ranting punk rock is still alive and thrashing in Canada, Toronto’s Cancer Bats employ a punishing blend of hardcore punk, metalcore, Southern rock, and sludge metal. Citing a wide berth of musical inspirations including Black Flag, Down, Led Zeppelin, Entombed, and Black Sabbath — they have toured Canada as a Sabbath cover band under the moniker Bat Sabbath — they emerged in 2006 with the hard-hitting Birthing the Giant. They caught fire in the early 2010s, earning Juno Award nominations for 2011’s Bears, Mayors, Scraps & Bones and 2013’s Dead Set on Living, and have remained at the forefront of the Canadian hardcore scene with subsequent efforts like The Spark That Moves (2018) and Psychic Jailbreak (2022).

Cancer Bats were founded in the spring of 2004 by singer Liam Cormier and guitarist Scott Middleton. Cormier and Middleton had worked together before in a metal band called At the Mercy of Inspiration, and were looking to launch a new project that would take their music in a harder but more elemental direction. Teaming with bassist Andrew McCracken and drummer Joel Bath, they formed Cancer Bats and recorded a four-song demo that they sold at shows in early 2005; the disc soon sold out two pressings and was later reissued as a 7″ vinyl EP by Tragicomedy Records.

After a few months, the group became disenchanted with drummer Bath, and Mike Peters soon took over as the group’s beat-keeper. Cancer Bats hit the road with a vengeance, playing all over Canada and making occasional jaunts into the United States while sharing stages with most of the Great White North’s best punk outfits. The hard-partying band released its first full-length album, Birthing the Giant, in the fall of 2006. It was released in Canada by Distort Entertainment, in the United States by Abacus Records, and in the U.K. by Hassle Records; each release featured the same songs, though the sequence was changed for the American release of the disc. The band kept up its relentless touring pace after the album hit stores, and played a major American tour opening for Billy Talent. In 2007, McCracken amicably parted ways with Cancer Bats to devote more time to his design business, and Jason Bailey, a veteran of the bands Shattered Realm and Figure Four, signed on as their new bass player. In 2008 the band released its second album, Hail Destroyer. After spending a couple of years touring the metal festival circuit, Cancer Bats released Bears, Mayors, Scraps & Bones in 2010.

Amid plenty of work and development for their own compositions, the band explored a collective love of metal gods Black Sabbath with the low-key inception of Bat Sabbath, an alter ego band whose sole purpose was to dutifully cover Sabbath songs. This classic metal influence was heavy on their 2012 album, Dead Set on Living, particularly in Cormier’s increasingly improving vocals. Fifth album Searching for Zero was made during a time of great turmoil for Cancer Bats, with exhausting amounts of touring and multiple deaths of people close to the band. This agonizing time was reflected in the dark and unrelenting tone of the album. On April 20, 2018, Cancer Bats surprised their fans by releasing their unannounced sixth studio long-player, The Spark That Moves, which was issued via their own Bat Skull Records in partnership with New Damage. Guitarist and co-founder Scott Middleton left the fold in 2021 to focus on his personal life and production work, leaving the group to operate as a trio. The following year, the band issued their seventh long-player, Psychic Jailbreak, which was produced with longtime collaborator JP Peters (Propagandhi) and included guest vocals from indie folk singer Brooklyn Doran on the searing single “Hammering On.” 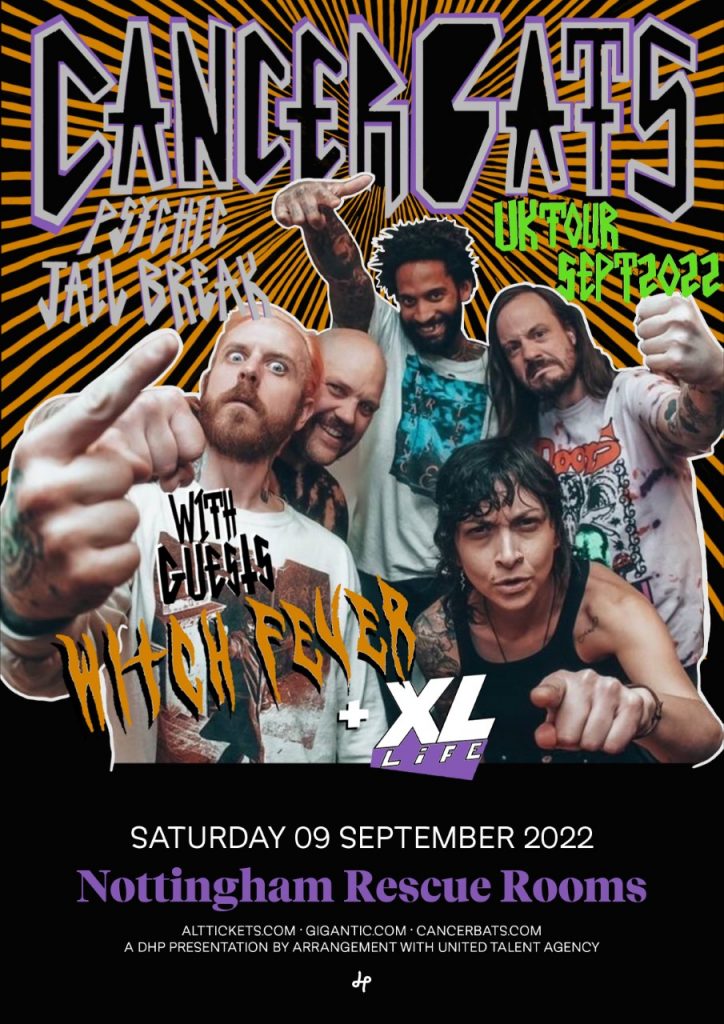