The ace up and coming The Amazons will be here on 6th October!! Here’s the official announcement:

*Confirmed to feature on ‘Later… With Jools Holland’ later this month*

“It’s just real, proper, shout-it-out, ‘make your parents tell you to turn it down’ rock and roll” – Mistajam

“The Amazons are a band to keep an eye and ear on.” – Gigwise

“Broods, rattles, and rolls with the best of them.” – Dork

“One of the most exciting outfits on the live circuit.” – Drowned in Sound

“One of the best new bands around without question.” – Greg James

As the May 26th release of their eagerly anticipated debut album draws near, THE AMAZONS continue the upwards momentum that they’ve maintained throughout the year by sharing their new single ‘Junk Food Forever’.

In addition to the single, THE AMAZONS can now announce details of an autumn UK headline tour and two major appearances: a performance on ‘Later… with Jools Holland’ which will be televised later this month; plus the news that they’re confirmed for BBC Radio 1’s Big Weekend which runs from May 27th-28th.

A staple of the band’s incendiary live shows, ‘Junk Food Forever’ delivers an anthemic rallying call which underlines the band’s mission statement to reinvigorate rock ‘n’ roll. With a colossal hook and an energised quiet/loud/quiet dynamic, ‘Junk Food Forever’ feels like a melting pot of landmark artists from the alt-rock, British indie and grunge scenes.

“Junk food forever was written at a time when a lot of my friends were leaving Reading, going travelling, working or university. The song lyrically is very nostalgic, kinda written out like snapshots and memories. I didn’t know where my future lay at the time and I was fearful of being left alone in my dead little commuter town.” says vocalist/guitarist Matt Thomson.

As with the rest of their self-titled debut album, ‘Junk Food Forever’ was produced by the Grammy nominated Catherine Marks (Wolf Alice, Foals, PJ Harvey) and recorded at the world famous Assault and Battery Studios in west London. The result is a collection that’s passionate, ballsy, tender and loud as hell. This is an album not just for the young, but the young at heart too.

It features many of the highlights that have soundtracked their rise to date – including the punk ‘n’ roll rush of opener ‘Stay With Me’, the playful rhythmic drive that underpins ‘Black Magic’, and the foreboding grunge of ‘Little Something’. With the brand new material just as essential, ‘Burn My Eyes’ recalls both Husker Du and Biffy Clyro with its cocktail of visceral aggression and melodic intent, while ‘Raindrops’ simultaneously showcases Thomson’s knack for introspective lyricism and emotive vocal delivery. The album comes to surprise conclusion with the lighters-aloft piano ballad ‘Palace’ which demonstrates another angle to band away from their fiery wall of sound.

It’s been a heady rise for the Reading-based quartet. The most hotly tipped guitar band of 2017 according to Music Week, The Amazons were shortlisted for the BBC Music Sound of 2017 poll, nominated for Q’s Best Breakthrough Act gong and made an appearance in MTV’s Brand New 2017 list. They also featured in Apple Music’s New Artists 2017 playlist and popped up in Amazon UK’s Ones To Watch and Deezer’s picks for 2017 polls.

Meanwhile the broadsheets and music press have been all over them, with NME, Kerrang!, Metro, Daily Star, Daily Mirror, Gigwise and Radio X all tipping them for greatness. Beat 1’s Zane Lowe is a huge fan, and so are Radio 1’s Huw Stephens, Annie Mac, Clara Amfo, Nick Grimshaw, Mistajam and Greg James.

Completed by guitarist Chris Alderton, bassist Elliot Briggs and powerhouse drummer Joe Emmett, THE AMAZONS have been honing their music for a decade, but it wasn’t until Valentine’s Day 2014 that they finally hit upon their true sound, thanks to a consciousness-shifting Foals show at London’s Alexandra Palace. The quartet began listening to the deeply primal artists that originally made them want to start making music; Rage Against The Machine, Nirvana and Led Zeppelin.

Having just completed a UK tour that was entirely sold-out in advance, THE AMAZONS will hit the road again in October for the first run of dates in support of the album. This upscaled series of gigs includes their biggest London show at The O2 Forum. The band’s summer festival schedule is also taking shape.

Sign-up for priority tickets at https://TheAmazons.lnk.to/PREPR, pre-sale links available direct to your inbox from 9am on Thursday 20th. General sale from 9am Friday 21st via http://theamazons.co.uk 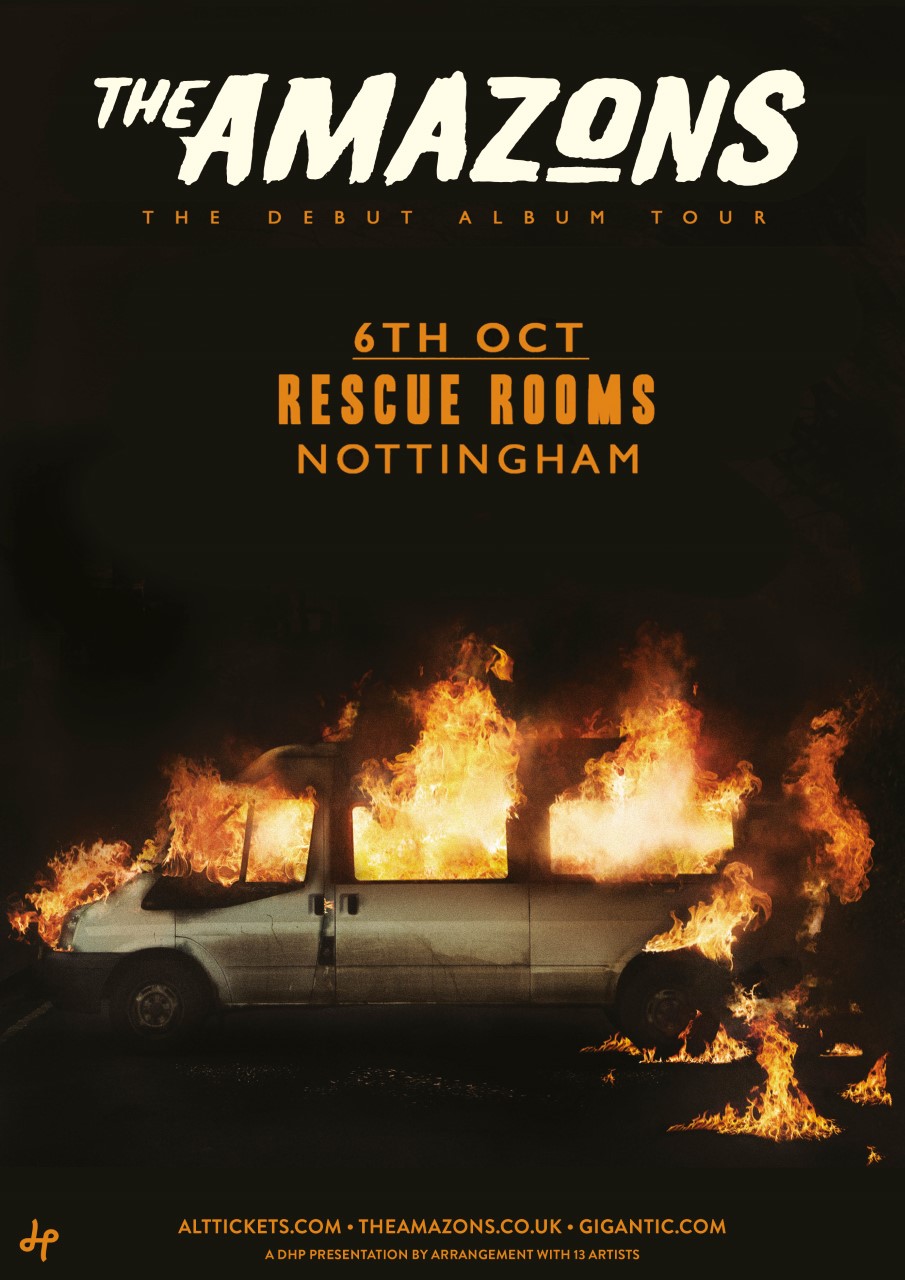