Beat the Streets is BACK!!!

Since launching in 2018, the festival has become a very well-established date in the Nottingham calendar, known not just for the financial support & awareness it delivers for Framework, but also for its support of artists from Nottingham & the East Midlands who consistently feature prominently throughout the bill.

More than 25 Artists have just been announced including Ferocious Dog, Lawnmower Deth, Palm Reader, alt blk era, Girlband, The Chase plus many more and will perform not just Rock City but other local independant venues, Rescue Rooms and Bodega.

This year proves to be no exception with the news that legendary Nottingham folk-punk band Ferocious Dog will headline. The band are long-time supporters of Beat The Streets, having previously performed at the inaugural event in 2018. They are known for their support of homeless charities, regularly encouraging fans to bring foodbank donations to their shows up & down the country, their appointment as headliners a perfect fit.

Beat The Streets continues to showcase the most exciting new music coming out of the local scene with the addition of ALT BLK ERA to 2023’s bill, the nu-metal sister duo won this year’s Nusic Future Sound of Nottingham and opened the Splendour 2022 main stage earlier this year. New to the Nottingham scene, Girlband are also set to play in January. Their lead singer & guitarist Georgie has previously played on stages at Beat The Streets multiple times, and following their sold out debut gig, the band are set for great things.

Over the past five years, Beat The Streets has brought the music community in Nottingham together to raise awareness of and funds for a vital cause; providing a stellar day of live music in the process, with over 15,000 tickets sold, and over £320,000 raised across ticket, bar & merchandise sales for Framework. 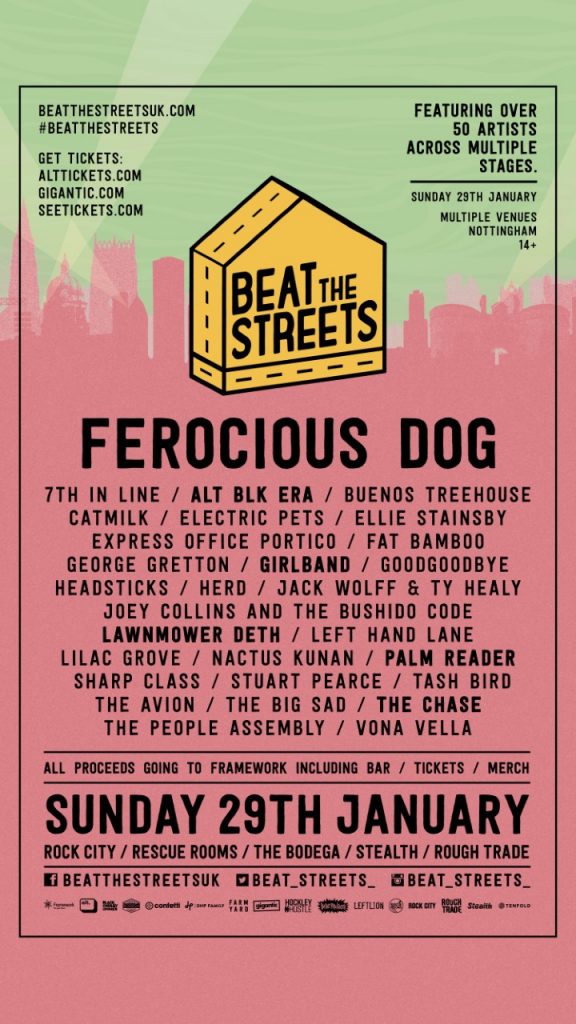 BEAT THE STREETS ON SPOTIFY