Dot To Dot Festival have announced the second wave of artists to join the bill for their 2021 event, this year taking place in September; the first autumn event in the 16 year history of the award-winning festival with a reputation for bringing the hottest new talent to city-centre stages.

The second wave of artists joining Dot To Dot Festival 2021 have now been unveiled, with over 40 names added to the line-up. The latest release of names from the award-winning festival with a reputation for unearthing new talent includes BLACK HONEY, SNAPPED ANKLES, BILLIE MARTEN, and SORRY. They, and others, will join previously announced headliners SPORTS TEAM, as well as PALACE, GIRL BAND and many more, this September in Bristol & Nottingham for the first ever autumn event in the festival’s 16-year history.

BLACK HONEY will perform at Dot To Dot once again, having previously played the festival in 2015. The Brighton quartet released Written & Directed in March 2021; a big, bold and well-received sophomore effort, full of perfectly formed vignettes that encapsulate their cinematic flair, while deftly delivering lyrics of empowerment with raw swagger in the face of the patriarchy.
London-based post-punk band SNAPPED ANKLES also join the bill for this year, fresh from the release of their hotly anticipated 3rd album Forest Of Your Problems, expected 2nd July. Since their formation in 2011, the band have become known for their live reputation & DIY shows, performing in “shamanistic costumes” and incorporating performance art & live improvisations into their sets. Their new album marks a thematic “return to the forest”.

With the release of third album, Flora Fauna, under her belt, BILLIE MARTEN will be bringing her characteristically hushed tones & melodies, floating lyricisms, and the newer, grungier elements of her music explored on the latest record, to stages in Bristol & Nottingham this September.

20-year-old West-Londoner and creator of lo-fi hip-hop, FINN FOXELL, follows a breakout 2020 that included the release of album Talk Is Cheap, with a spot on the Dot To Dot line-up, as do DECO; the ‘80s inspired indie synth- pop band who create undeniable bops with a bite, and MATHILDA HOMER, a jazz-leaning pop songwriter whose music is rich with soul & timelessness.
Previously announced headliners, SPORTS TEAM also continue Dot To Dot’s rich tradition of championing emerging talent, from their last appearance at D2D, mid-way down the bill in 2018, followed by a breakout 2019, to their now unparalleled reputation for excellent live shows that are guaranteed to be injected with raw energy. Frontman Alex Rice said: “Can’t wait to be back, this’ll be the first time we’ve played our debut album since it was released in 2020. A two night inter-city headline feels the right way to dip our toes back in.” Other previously announced performers include shimmering indie rock band, PALACE, and highly regarded Dublin 4-piece GIRL BAND along with many others.

And, making up the rest of Dot To Dot’s huge second line-up announcement are: politically minded REGRESSIVE LEFT, a band overflowing with experimental art-rock ideas; REFLEKTER’s undeniable, anthemic British rock sounds; LUKE ROYALTY’s genre blend of pop, hip-hop & soul, and confessional storytelling lyrics; ArtPop performer with an escapist spirit, CJ PANDIT; the defiant punk of JOE & THE SHITBOYS, who formed to call out the bad behaviour in the music scene of their conservative homeland; Recent Island Records signee ALFIE SHARP who hails from Nottingham; EVE OWEN, after recently spending time writing, recording and collaborating with The National’s Aaron Dessner; ALLMAN BROWN, who has been hailed amongst today’s most compelling new singer-songwriters; JERUB, with his blend of genres and powerful & soulful vocals; the nostalgic allure and contemporary punch of WEIRD MILK’s indie sound; and VAUGHAN, a British singer-songwriter emotively and eloquently blending alt-pop and electronic sounds.

These latest additions enhance an already stellar line-up, with the Bristol leg of the new-music-championing festival now sold out. Showcasing emerging acts is a core part of the ethos of Dot To Dot Festival, organiser and Director of Live at DHP Family, Anton Lockwood, said: “We’re really excited to be bringing so many fantastic emerging artists to these stages, many of which are in grassroots venues, particularly with the guarantee of performing in front of sold out crowds in Bristol. These types of venues & new artists are a huge part of the live music ecosystem in the UK, and after so long away from gigs & venues, Dot To Dot this September is sure to be a massive celebration of live music and the importance it holds.” 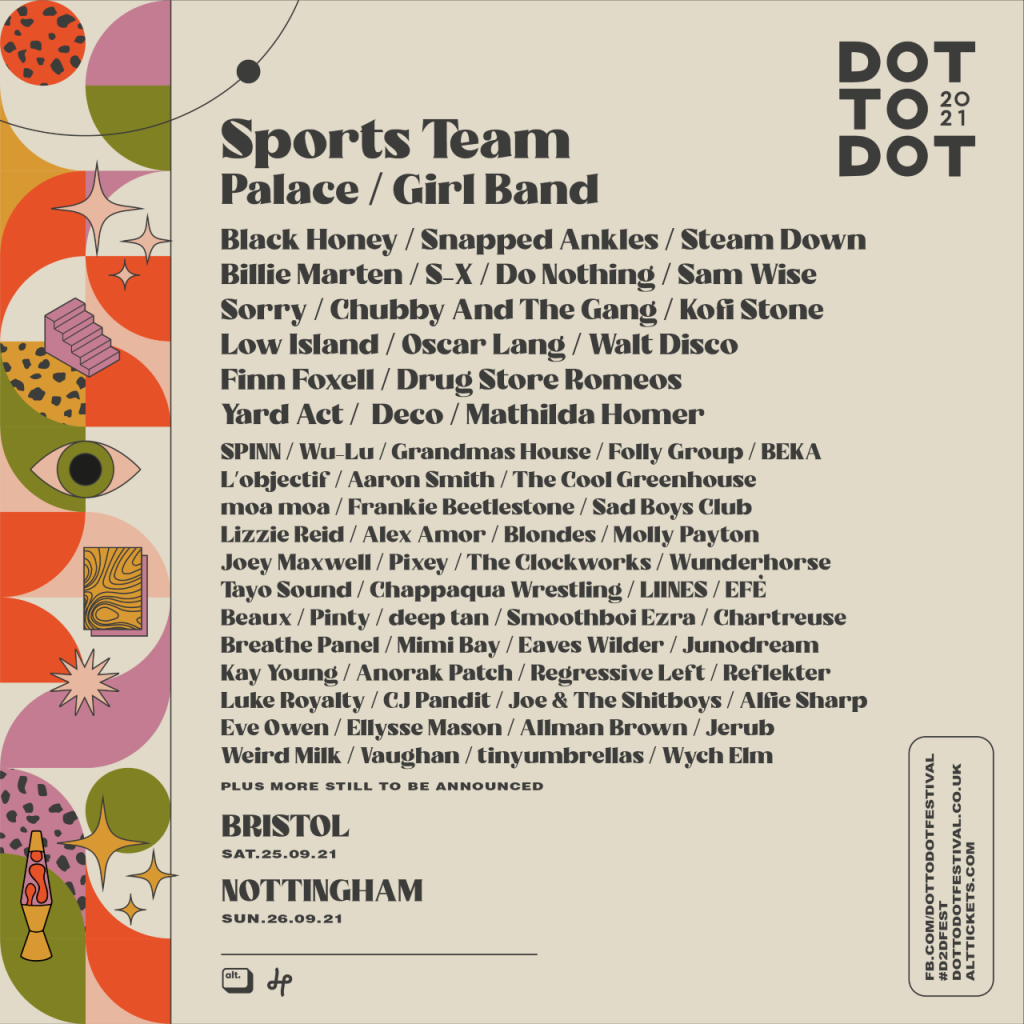