InMe are a well known alt-metal band hailing from Essex, England. InMe have to date released 6 highly successful studio albums, spawning a number of Top 40 UK singles and years of touring and playing great shows and festivals around the UK, Europe and the world. Over a 20-year career, the band have toured with the likes of Alien Ant Farm, The Rasmus, Nickelback, Limp Bizkit, Pendulum, Deftones, Serj Tankian, Staind, Feeder, Gun and Biffy Clyro as well as numerous major festival appearances including Reading, Download, and Sonisphere. InMe were recently awarded a coveted KKKKK in Kerrang for their Download performance. Following the release of a new single, ‘For Something To Happen’ in November 2018, the band ended the year with a 9 date UK tour alongside Wheatus and ‘A’. InMe opened 2019 with a 5 day sold out UK headline tour in January and promise a busy year of new music and a solid touring schedule. The band are now working on their seventh studio album, which will be released on Killing Moon Records in 2019.

Raging Speedhorn return to action with the release of their killer new studio album, ‘Hard To Kill’, which will be on their own Red Weed Records label on October 23rd 2020. Recorded with Russ Russell (Napalm Death, At The Gates) at Parlour Studios in Kettering, UK, ‘Hard To Kill’ sees Raging Speedhorn once again upping their own ante in terms of song-writing finesse … playing riff-fuelled dirty heavy metal with aplomb. “This album is straight-up Raging Speedhorn – with added extras,” says founding co-frontman Frank Regan. “Right now, the band is on fire, the vibe is amazing, and we’re so happy to be back playing music. Six albums in and we’re still loving what we do.” The album – the follow-up to 2016’s ‘Lost Ritual’ is the first to feature new vocalist Dan Cook who replaces long-standing co-vocalist John Loughlin. John stood down after 21 years during the recording of ‘Hard To Kill’ leaving the mantle open for Dan. RSH also welcome new guitarist Dave Leese and former Hundred Reasons bassist Andy Gilmour who join founding drummer Gordon Morison and guitarist Jim Palmer. Over the course of 20 years Raging Speedhorn have built a solid and long-standing reputation as one of the UK’s leading metal outfits. Since the release of their eponymous debut in 2000, the sextet have enjoyed a career built on stunning, raucous live shows and albums to boot. Playing worldwide shows and festivals – sharing stages with the likes of Slipknot, Clutch, Enter Shikari and many more. 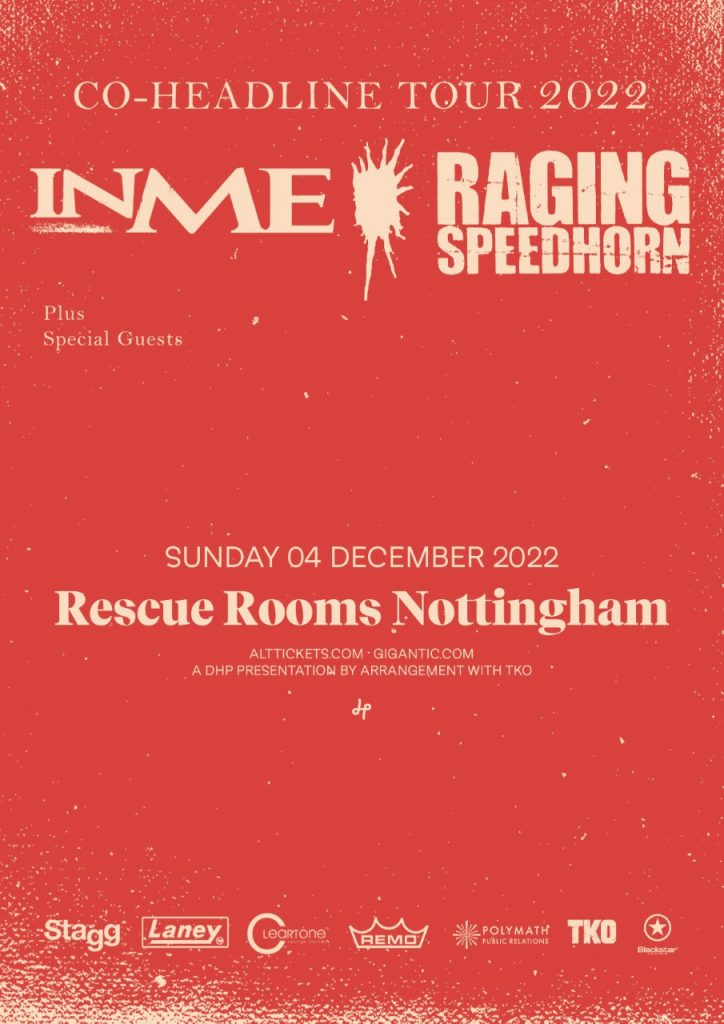