Tickets are now available for Kula Shaker at Rescue Rooms.

Kula Shaker, the last great heretics of British rock. Named after a 9th century South Indian King, the band’s esoteric mix of psychedelic riffs, mantras and rock and roll mysticism laughed in the face of Britpop orthodoxy in the 90’s.

So when, after a million selling debut (K), mind-bogglingly brilliant follow up (Peasants, Pigs & Astronauts) and a string of Top Ten singles, they called it a day as the skies darkened over England during 1999’s total eclipse, it felt for fans like more than the lights going out.

Whilst the band never completely went away – they played from Aberdeen to Osaka in support of 2007’s Strangefolk and 2010’s Pilgrim’s Progress – there was always a sense that the quartet (now featuring keyboardist Harry Broadbent) were waiting for the stars to align once more.

In 2016 Kula Shaker celebrated their 1st album anniversary with the brilliant K 2.0 and a grand world tour. Some guessed it might be their last hurrah but, as it turned out, it was a new beginning.

2022 sees the launch of ‘1st Congregational Church of Eternal Love & Free Hugs’ – an epic double album, bristling with energy, vitality and most importantly, killer tunes, proving that the Once & Future King has undoubtedly returned – rebooted, re-energised and ready to reclaim the throne.

Welcome to the Congregation! 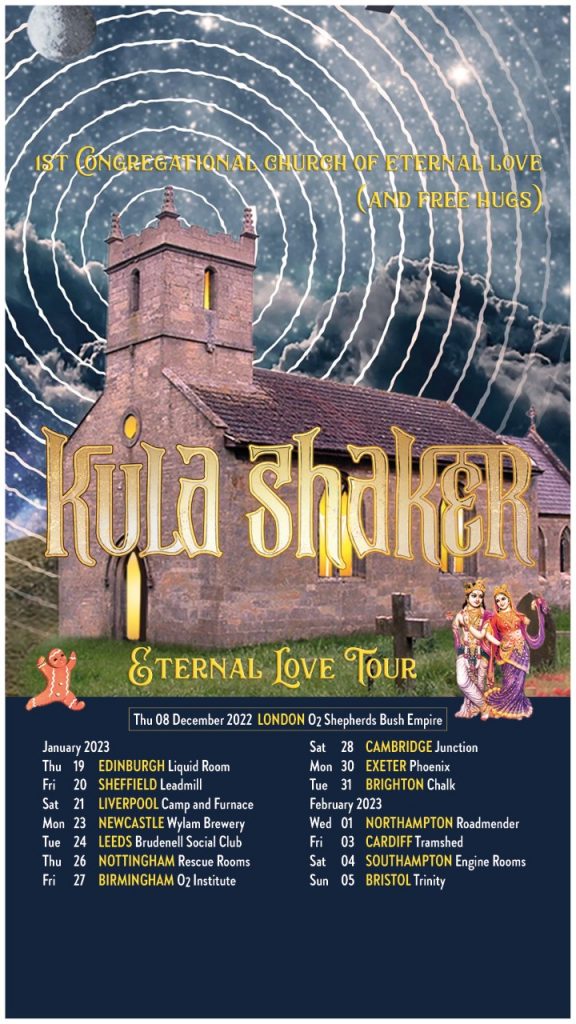