“The true spirt of rock n’ roll is a relentless pursuit that consumes me on a daily basis. Chasing after it, making this record was a race well run” – Ricky Warwick.
Born in Newtownards, County Down, Northern Ireland,singer/songwriter/guitarist Ricky Warwick was cut from the cloth of a mill workers’ jacket. Raised on a diet of Patsy Cline, Johnny Cash, Thin Lizzy, Stiff Little Fingers, Motown and everything in between.Saving his money from a newspaper round and a little help from his father, Ricky got his first electric guitar at age 13. “ That cheap electric guitar changed my life….it saved me, it was more than just notes on a fretboard, it was the deepest breath of life I ever experienced, “ explains Warwick.
At age 14 Ricky and his family relocated to Strathaven, Scotland. It was here that Warwick fully immersed himself in the sonic seas of Rock n Roll. Writing and practicing every free moment he wasn’t working on his father’s farm, Ricky got a call to join acclaimed U.K. Punk/Folk band New Model Army as rhythm guitarist on their 1987 “ Ghost Of Cain” World Tour. Following New Model Army,Ricky went on to form The Almighty in Glasgow who enjoyed ten top forty singles and four top twenty albums in the U.K. during the late ‘80’s/early ‘90’s, touring worldwide with such iconic bands as The Ramones, Motorhead, Megadeth and Iron Maiden.
In 2002,after relocating back to Ireland, Ricky recorded his first solo album “Tattoos & Alibis” in Joe Elliott of Def Leppard’s studio in Dublin with Joe also handling production duties. It marked a shift in direction “I realized that I didn’t need to yell over a wall of sound to make my point…less is more, stripped back instrumentation could achieve the same goal just as effectively. I learned so much making that record primarily about myself”. Warwick would go on to release two more solo albums between 2002 -2010 and tour globally opening for the likes of Def Leppard, Cheap Trick, Bryan Adams and Lynyrd Skynyrd.
In January 2010 Ricky received a call from his old friend Scott Gorham who was spearheading a reformation of Ireland’s favourite sons Thin Lizzy and wanted Ricky to front the new line up.” I was shocked, terrified, excited and extremely humbled when I got that call. Phil Lynott was my hero and Thin Lizzy were the soundtrack of my life. I realized that I could never hope or even dare to try and stand in Phil’s shoes.All I could do was try and stand beside them and sing his songs with as much heart, soul and passion possible. In late 2012,with a necessity to write and perform new material, out of respect for the Thin Lizzy name, Black Star Riders were born. Warwick is the frontman and main songwriter for the band and 2013 saw the release of Black Star Riders acclaimed debut album
“All Hell Breaks Loose”.
Black Star Riders have now released four critically-acclaimed and commercially successful albums the most recent being 2019’s “Another State Of Grace” They have achieved two U.K. top 15 albums and one U.K. top 10 album as well as mainstream radio play which includes claiming two “singles of the week” on BBC Radio 2.
Following 2016’s lauded “ When Patsy Cline Was Crazy… And Guy Mitchell Sang The Blues’, Warwick is getting ready to unleash his 5th solo album in 2021.Titled “When Life Was Hard & Fast”, it was recorded in Los Angeles and produced by Keith Nelson (ex-Buckcherry), who also co-wrote the majority of the songs on the record with Warwick. “Keith Nelson and I share a passion for good, honest, rock ‘n’ soul. Making the album with Keith who shares a similar outlook and work ethic as myself was a no brainer ….also the fact that he has a killer collection of vintage guitars contributed greatly”
“I wanted to create an album that had the simplistic melodies of Tom Petty and the Heartbreakers charged with the electric hedonistic fury of Johnny Thunders And The Heartbreakers.Recording the album as live as possible with a full band was requisite to achieving the desired effect”. Xavier Muriel (Ex-Buckcherry ) on drums and Robert Crane (Black Star Riders) on bass completed the core band and turned in stellar performances, giving the songs a real lease of life.
Also, once again,Warwick tapped some of his closest friends for guest appearances on the record, including Andy Taylor ( Duran Duran & Power Station) Luke Morley ( Thunder), Joe Elliott ( Def Leppard), Dizzy Read ( Guns n Roses ). Ricky also duets with his daughter Pepper on the song “ Last Place That I Look”.“I can’t wait for people to hear this album and to hit the road touring it whether it’s with my band The Fighting Hearts or just myself and my acoustic – it will be amazing. I’m grateful that after 30 years of making records my appetite for writing and playing is the same as it was that day all those years ago when I got my first electric guitar”
For those intrigued by the album cover it depicts a crash scene from the famous Ards TT Motor Car Race in County Down Northern Ireland. The race ran from 1928 until 1936 was watched by over 250,000 spectators annually. The embankment in the photograph that the spectators are on is actually a field belonging to Ricky’s Great Grandfather’s Farm which he grew up on for the first fourteen years of his life. 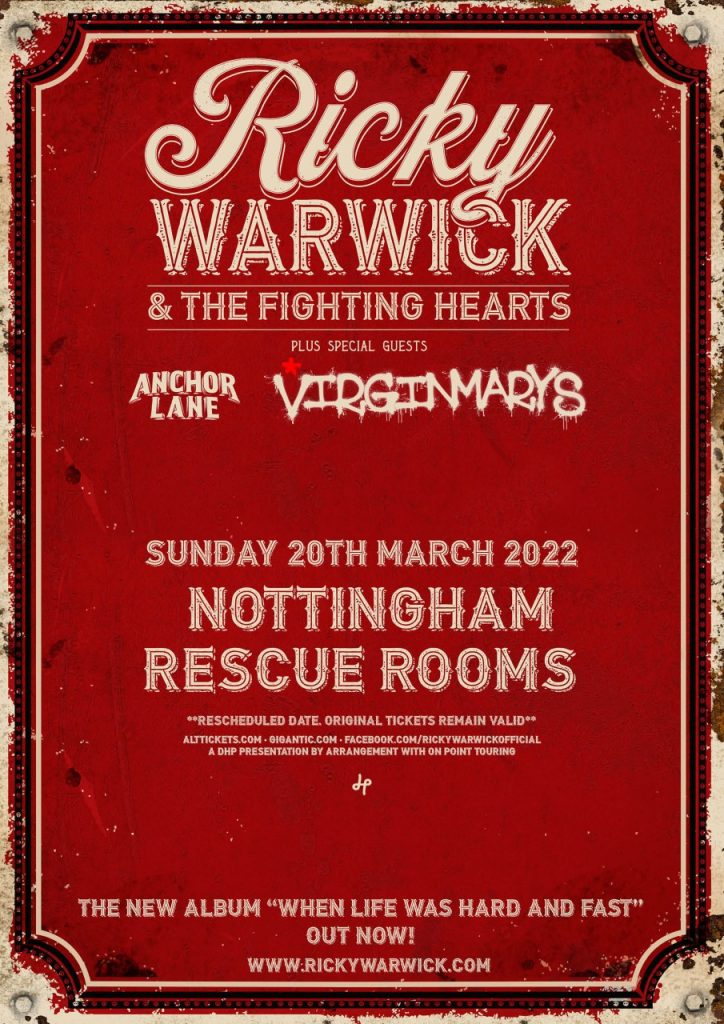