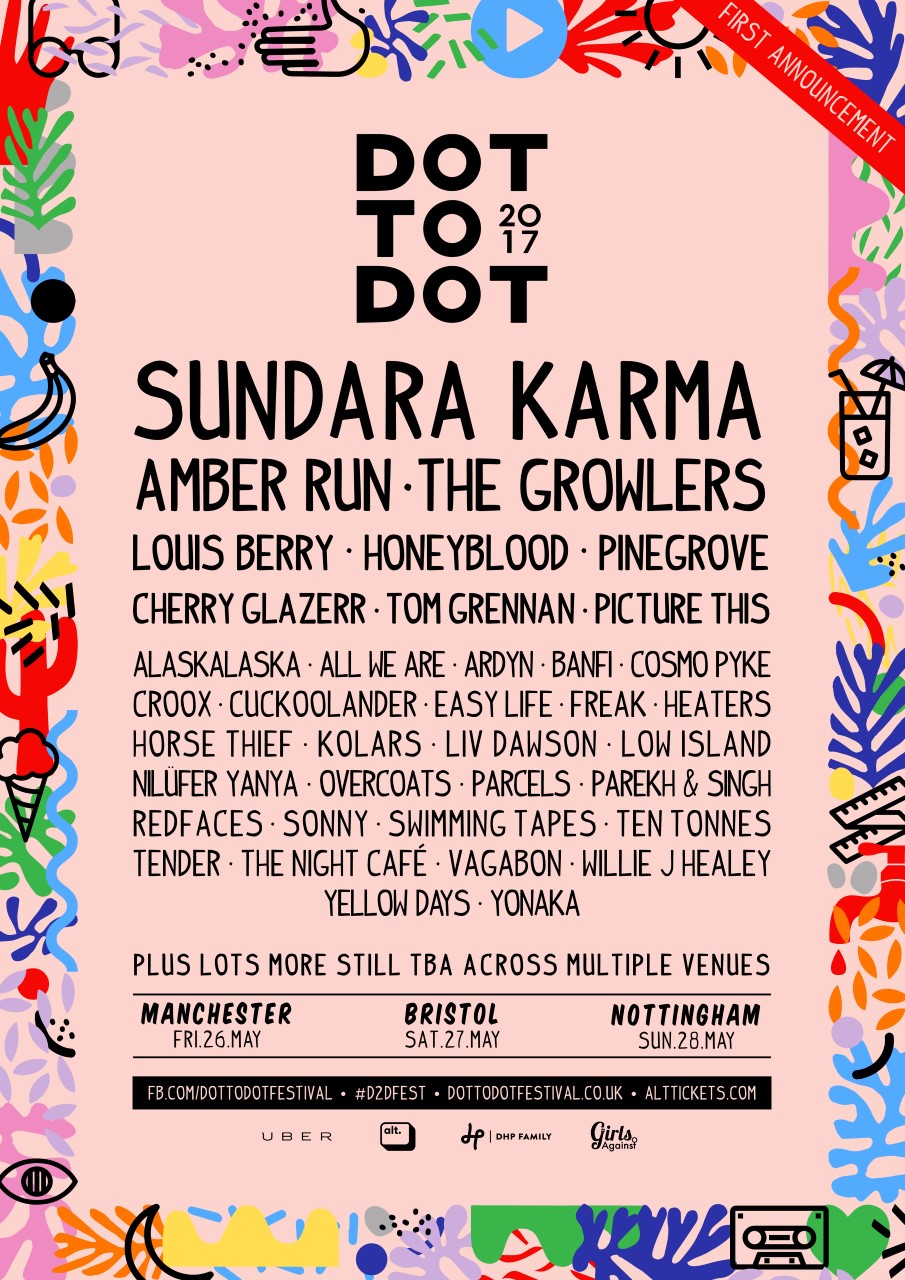 FIRST WAVE OF ARTISTS ANNOUNCED FOR DOT TO DOT FESTIVAL 2017

Winner of Best Festival at the Live UK Awards 2016

“Each place opens up all of their best venues to embrace these soon-to-be-huge acts and we all get to boast that we saw them up close before they were huge. The only real worries are the inevitable agonising clashes and where to begin.” Virtual Festivals

The UK’s premier festival for unearthing the best new talent, Dot To Dot Festival, returns to Manchester, Bristol and Nottingham from the 26th-28th May for its 12th edition. After smashing record attendance, and marking a sell-out Manchester event in 2016, more of the same is expected for 2017, with a huge lineup of established performers and emerging artists from around the world.

With many exciting announcements to follow, Dot To Dot, are ecstatic to announce the first wave of artists to play this year’s festival:

Euphoric guitar rock supremoes SUNDARA KARMA will return to the Dot To Dot stage, this time as festival headliners! Their meteoric rise and epic debut album came as no surprise to anybody who have seen these guys at Dot To Dot before. With stage presence in abundance, and a plethora of huge songs such as ‘Flame’, ‘Loveblood’ and ‘She Said’, Sundara Karma embody everything Dot To Dot stands for and we can’t wait to see them own the headline slot.

Joining them will be more Dot To Dot legends, in the form of Nottingham’s own AMBER RUN. Their scintillating second album just dropped after a year in the studio, and we couldn’t be happier for their return. Californian rockers THE GROWLERS also join the party, after their latest album ‘City Club’, produced by The Strokes frontman Julian Casablancas, took the UK by storm when it was released last year.

After a memorable performance in 2015, high octane Scottish duo HONEYBLOOD, have also been confirmed to return. With their blend of Americana influenced, emo-tinged indie rock PINEGROVE are crossing the Atlantic for this year’s Dot To Dot. LOUIS BERRY will be stamping his own brand of Merseyside rock ‘n’ roll on this year’s festival. We’ll also be treated to sets by much-hyped LA 3-piece CHERRY GLAZERR, Irish chart-toppers PICTURE THIS and BBC Sound Of 2017 shortlisted vocalist TOM GRENNAN.

Dot To Dot Organiser Anton Lockwood, of DHP Family, said: “After our record breaking festival in 2016 we are so excited to bring the festival back to Manchester, Bristol and Nottingham this year! We are always proud to see so many previous Dot To Dot artists become huge successes, with Sundara Karma working their way up the ranks to headline this year’s event. We pride ourselves on finding & nurturing new artists, we can’t wait to see the stars of the future playing in small venues this year before their big breaks. This first announcement is only the tip of the iceberg, and there are loads more phenomenal performers still to be announced across multiple venues very soon!”

Previous Dot to Dot line-ups have seen performances from The xx, Ed Sheeran, Mumford and Sons, The 1975, Frank Turner, Caribou, Wolf Alice, Jake Bugg, SBTKRT, Florence + The Machine, Peace, Courtney Barnett and many, many more. With the emphasis on showcasing the hottest new talent on the planet, there will be lots more exciting additions to be announced for Dot To Dot’s 2017 line-up. Make sure you keep checking www.dottodotfestival.co.uk for all the latest news and ticket info. Also subscribe to our Facebook, Twitter, Instagram and Snapchat to keep yourself in the loop for all things Dot To Dot. Tickets are priced from £12 and available now through www.alttickets.com