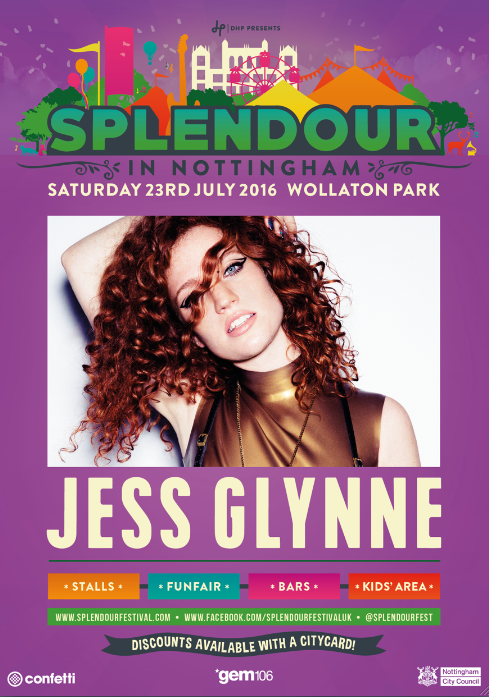 One of the biggest artists of the past 12 months, Grammy award winner and Brit nominated pop sensation ​Jess Glynne​is to headline Splendour on 23 July 2016.

The British singer­songwriter has been booked for the Wollaton Park Festival in July hot on the heels of a US, European and UK headline tour promoting her no1. double platinum album.
George Akins, owner, DHP Family, said: “We’re delighted to announce Jess is to headline Splendour this year. With her UK tour completely sold out already, it’s good news for the fans who were disappointed after she was forced to pull out last year to undergo vocal cord surgery. Those who got to see her play a very well received sell out show at Rock City last November will be delighted to see her return to the city once again.”

The booking comes on the back of an amazing year for the artist after her debut album ­ ‘I Cry When I Laugh’ ­ made her the biggest selling debut artist of the year. The album features her five number one singles including smash hit ‘Hold My Hand’ and its equally successful follow up ‘Don’t Be So Hard On Yourself’, along with the recent single ‘Take Me Home’, the official song for Children in Need.
Jess is the first solo female artist to headine Splendour since Kate Nash took to the main stage in the first year of the festival in 2008.

The singer, 26, has already equalled the record for the most number one singles by a British female solo artist — five — and has now announced a brand new single from the album, ‘Ain’t Got Far To Go’, due for release on 26 February via Atlantic.
Jess Glynne is the first of the line up to be announced for the city’s annual summer bonanza of music, comedy, food and drink with many more artists, comedians and entertainers to be revealed over the coming months.

Recognised as the city’s biggest summer day out and shortlisted in the final three for Best Festival in the national Live Music Business awards, organisers DHP Family and Nottingham City Council are keen to replicate the success of last year which saw 20,000 turning out to see storming sets from headliners The Specials, James, Bananarama and Lawson. With lots happening all over the park aside from the three music stages, including comedy in the courtyard, a kids’ area and entertainers out and about in the crowd, the festival is a fantastic day out for all the family.

Also on board again is Confetti following a successful six year partnership with Splendour which sees its students gaining invaluable industry insight working across many aspects of the festival.

Craig Chettle, Chief Executive Confetti ICT, said: “Confetti is delighted to be supporting Splendour for the sixth consecutive year. Confetti is all about providing real opportunities for our students to work with and learn from the pros. Our support for the festival gives our music, technical events, TV and film students unique and enviable insights into staging a festival of this scale. They don’t just observe– they work with our technicians and the festival teams to run the live stages – from stage management to filming and editing content for Notts TV. This gives them invaluable work experiences that I don’t think can be found anywhere else”.

Tickets can be purchased from all the main ticketing sites or in person from locations around the city such as Nottingham Tourism Centre; Royal Concert Hall and city council leisure centres.
To stay in touch with festival news and line up announcements, follow Splendour on twitter @SplendourFest;

​and be the first to hear about Splendour 2016 tickets and artist announcements by registering here: www.splendourfestival.com/mailing­list