Following nearly 18 months of lockdown for the entire live industry, acclaimed British soul singer and songwriter JP Cooper is delighted to announce his first headline tour in almost 3 years. He will tour across the UK and Ireland from April – May 2022, in support of his highly anticipated second album “SHE”.

JP will be returning to smaller, more intimate venues, taking in 23 towns and cities, kicking off in Ireland on 23rd April before finishing the tour in his hometown of Manchester on 29th May.

Speaking about the tour JP says:

“I decided a while ago that because of the pandemic and all of the struggle and separation that everyone has experienced during the last 18 months, I wanted to go back to more grassroots venues on my next tour, back to the kind of places I played when I was coming through. Firstly, to show some love to the venues themselves; they play such an important role in artists’ early careers and a lot of them have struggled to stay afloat during this period.

Secondly, I wanted to play these smaller rooms again to make it easier to connect with you guys and for you to connect with me. We’ve spent so much time apart that it’s going to be amazing to be up close and personal once again. The shows will be more intimate and stripped back, which will give us the opportunity to properly re-connect.

I’m so excited to be coming out with the band, some of whom have been with me for years, and to re-create that feeling we used to have when I did the open mic nights and small venue circuits around the UK. Keep your eyes out for the dates. On this tour, I want to shift the focus to the fans more than ever before, as we have all been through the uncertainty of the pandemic together. I want everyone to feel like a VIP. Cannot wait to get out and see you all.”

For each ticket purchased, fans will also receive a signed tour poster, souvenir lanyard and exclusive access to a live streamed Q+A with the artist himself. Tickets will be available for pre-order from Tuesday 24th August at 3pm, ahead of the pre-sale date on Wednesday 25th August and general sale on Friday 27th August at 10am.

JP’s headline tour comes in support of his upcoming album “SHE”, set for release on 15th October via Island Records. “SHE” is a collection of songs paying homage to some of the greatest women in JP’s life, with themes around relationships, faith, and family.

Best known for two of the biggest and most enduring hit singles of the last few years- Jonas Blue’s memorable smash “Perfect Strangers”, which Cooper co-wrote, and his inescapable radio hit “September Song” (which has racked up over 600 million streams worldwide), the Manchester born troubadour has an incredible 1 million ADJ Global album sales, over 4 billion total global streams, fuelled by his devoted 11 million monthly Spotify listeners. In addition, JP has racked up over 120,00 radio plays across 250 radio stations and sold out UK and European tours. 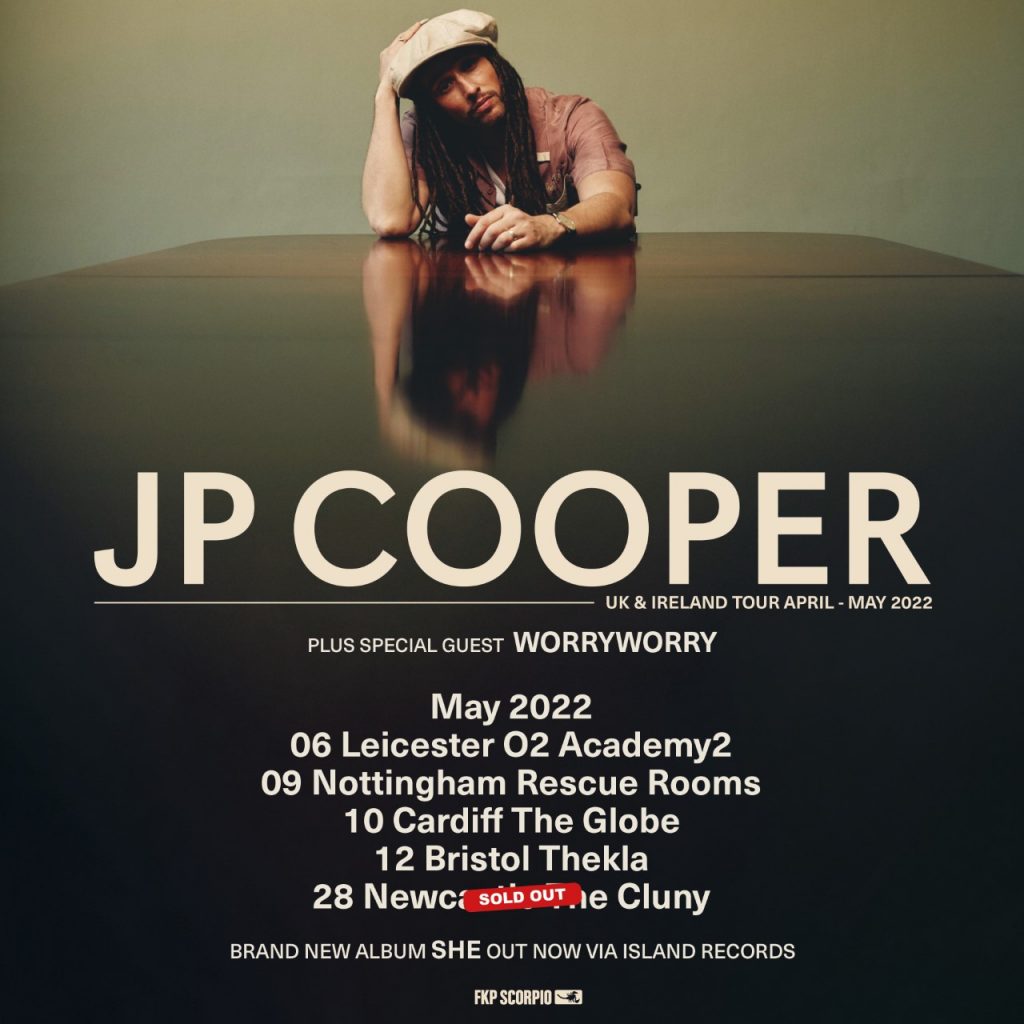