DOT TO DOT FESTIVAL ANNOUNCES ARTISTS FOR 2022 EDITION OF THE MULTI-VENUE FESTIVAL!!

Dot To Dot Festival, the award-winning festival with a reputation for bringing the hottest new talent to city-centre stages, have announced the first artists to join the bill for their 2022 event, returning to the late May bank holiday weekend following the sell-out success of their later September edition in 2021.

Dot To Dot’s rich tradition of championing emerging talent is once again front and centre with the news that SQUID will headline the festival in Bristol and Nottingham on the 28th and 29th of May respectively. The English post-punk band are currently riding high on the success of their debut album Bright Green Field, released to much critical acclaim last year, including a perfect-score review in NME and a 6th place ranking on Rough Trade’s albums of 2021.

As with many of Dot To Dot’s most recent headliners, Squid have previously appeared further down the festival bill, performing in earlier slots on smaller stages at the 2019 event. Dot To Dot Festival booker Joshua Ward expressed that this approach is a major part of the festival’s ethos, saying: “D2D has always been about celebrating the best new musical talent on offer, and one of the best parts of that is seeing artists grow and develop from performing lower down our bills to becoming potential headliners. We saw it last year with Sports Team and we’re delighted to have another example of it this year with Squid. We can’t wait to see what’s guaranteed to be an unforgettable headline set.”

👉 MORE ARTISTS THAN YOU CAN SHAKE A STICK AT

Joining Squid for D2D’s 2022 edition is grime MC GHETTS. Hailing from East London, the rapper is known for bringing a sinister intensity to even his most pop-friendly tracks, notably including collaborations with Ed Sheeran, Stormzy and Dave. Ghetts released his third studio album, Conflict of Interest, in 2021, peaking at number 2 in the Official Album Charts and receiving many positive reviews.

Brighton-based rap and production duo FRANKIE STEW AND HARVEY GUNN will also be showcasing their blend of hip-hop, rap, garage, grime and dance influences in Bristol and Nottingham this May. Touted as some of the hardest working boys in the game, the pair have been making waves in the lofi hip-hop scene with their unique sound and collaborations with Loyle Carner, Kofi Stone and Joel Baker.

Having released her debut EP in November 2020, followed by an album in September 2021, BABY QUEEN is seemingly very quickly making a name for herself, and joins the bill for Dot To Dot Festival 2022. Her recent success, however, comes off the back of many years of hard work behind the scenes since emigrating to London from South Africa in 2015, all of which has ultimately culminated in a well-deserved place on Radio 1’s Sound of 2022 long list.

Elsewhere on the D2D 2022 line up is the “beyond-his-years” songwriting talent of ALFIE TEMPLEMAN. At just 15 years of age in 2018, Alfie released his debut EP on Chess Club. He has since gone from strength to strength with his following projects, most recently releasing the hotly anticipated album Broken in February 2022.

Self-described as “the UK’s alt hip-hop version of avengers assemble”, NINE8 COLLECTIVE will bring their inner city perspectives to the D2D masses this May. The supergroup of rising underground artists includes Biig Piig, Lava La Rue, Bone Slim, Nayana IZ, LORENZORSV, L!BAAN, Nige, KxRN and MAC WETHA (who will also perform his own separate set). Meanwhile, Manchester’s indie-pop three piece CASSIA will provide the necessary tropical vibes for an event that gateways the start of the festival season and summertime. 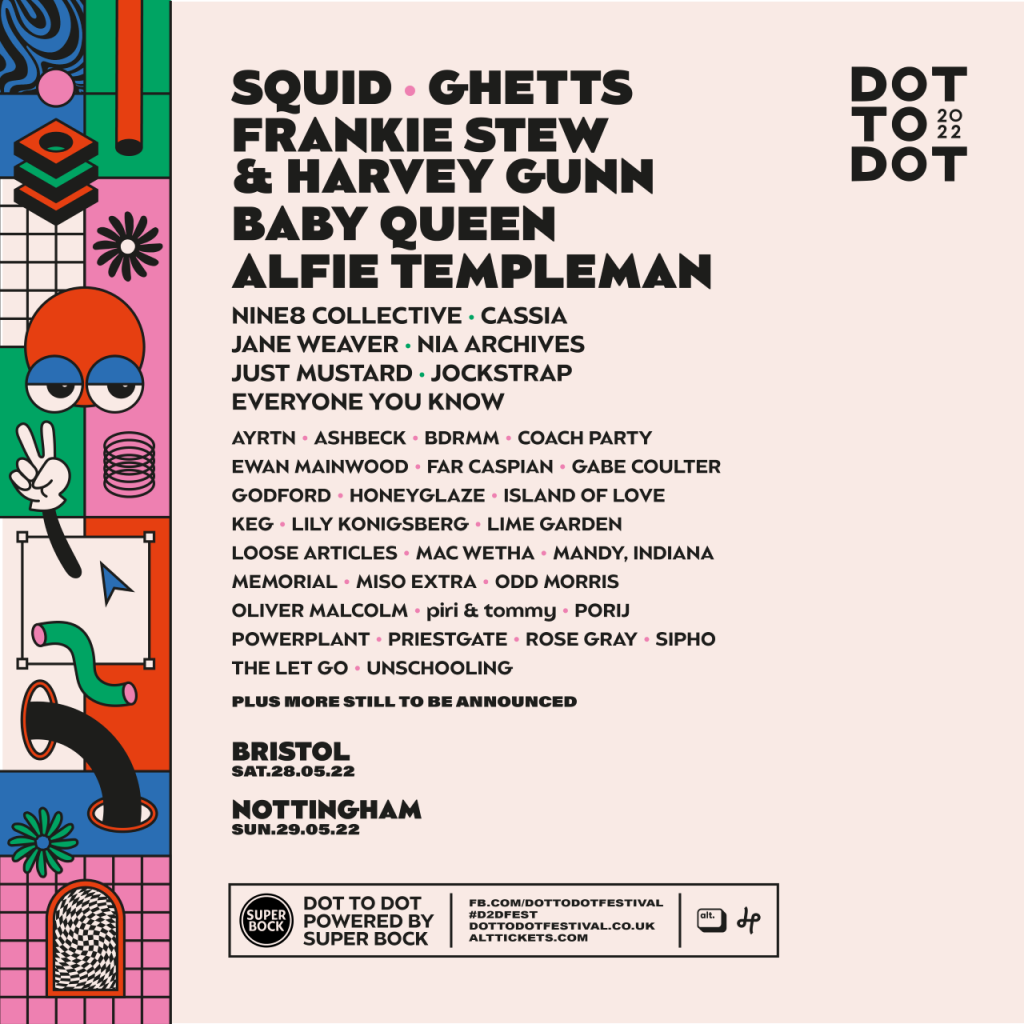 With her eleventh full-length studio album Flock, released in 2021, JANE WEAVER has an extensive decade long back catalogue of synth sounds, dream pop, folktronica, and an array of other influences to perform at the festival. Likewise, producer, singer, songwriter and visual artist NIA ARCHIVES also joins the line-up, fresh from the release of seven singles since the beginning of 2021, with a distinct aesthetic and versatile style that is influenced by a range of genres including hip-hop, soul, drum and bass, jungle and house.

Also on board are Irish five piece JUST MUSTARD, who draw on influences from shoegaze, post-punk and noise rock, and released their debut album, Wednesday, in 2018 to critical acclaim. London-based duo JOCKSTRAP have been building a buzz with their strange but sophisticated sounds, formed through the disruption of gentle vocals by unpredictable production. They join the D2D 2022 bill, as do brother duo EVERYONE YOU KNOW, who will be bringing a unique blend of post-millennial British influences for the new generation to crowds at the multi-venue metropolitan festival.

Dot To Dot Festival prides itself on seeking out the freshest emerging musical talent with 2022 proving to be no exception, particularly with the appointment of Squid as headliners, a mere 3 years since they first played the festival. Director of Live at festival organiser DHP Family, Anton Lockwood, said: “We’re extremely pleased to be announcing Dot To Dot Festival 2022, with one of our most diverse line-ups to date. I have always said that Dot To Dot is all about seeing your favourite band as headliner and your new favourite band earlier in the day. That certainly looks set to ring true this year, and I’m looking forward to catching some of the earlier slots by artists that will no doubt be headlining in years to come.”

With “Early Bird” tickets now sold out, tickets for Dot To Dot are priced from £25 and available now through alt. tickets.

ALL THINGS DOT TO DOT: