Tickets are now available for Cassia live at Rescue Rooms.

Macclesfield band Cassia have shared a further track from their recently announced forthcoming album ‘Why You Lacking Energy?‘, due for release on 15th July. The latest single, ‘Not Enough Time To Think‘, is a woozy, long-distance love song, driven by an intense, impatient bass line and a dreamy string intro.

Singer Rob explains, “It’s a song about feeling impatient whilst being away from someone you care about and that ever growing sense of uncertainty as to whether that person will wait for you“.

The band have also released an animated video for the track, within which Cassia share yet more of the abstract world in which the forthcoming album exists. Their fabled world symbolises being drained of energy through endless social media scrolling and the resulting information overload. The album is represented as the Motion Energy Drink which is the “cure” for the demeaning strength. The concept evolved after the band felt like they’d put every ounce of their being into this album, ultimately resulting in their energy being bundled into their artform. The video was directed by Scott Kennedy, and is the prequel to the recent Vasilia Forbes-directed ‘Motions’ video, which is available to watch here.

LISTEN TO ‘NOT ENOUGH TIME TO THINK’ | WATCH THE ANIMATED VIDEO

The single will feature alongside previously released tracks ‘Motions’, Similar‘ and ‘Right There‘ on ‘Why You Lacking Energy?‘, dropping 15th July on BMG. From spacious piano ballads to crisp, synth-driven anthems, the self-produced record digs into the tension that exists in Cassia’s music: these are songs that feel like living in the moment, but are caught up in thoughts of the past and anxieties for the future. It’ll be available on limited edition pale pink vinyl with a tricolour limited vinyl also available from HMV, independent record stores and the band’s official artist store, where fans will also be able to purchase a glitter cassette.

Cassia; Rob Ellis (lead vocals/guitar), Lou Cotterill (bass) and Jake Leff (drums) create cathartic songs that take full control of their emotions. “We know each other best through writing music,” Lou says. “It’s all there in the lyrics.” With the release of their debut album ‘Replica’ (2019), the band became main-stage festival favourites, and secured a live session at BBC Radio 1’s Maida Vale studios. In the  two and a half years that have followed, they’ve been collectively championed by Clara Amfo, Annie Mac and Jack Saunders, including two Hottest Record accolades on BBC Radio 1.

For a band whose live show has garnered them an AIM Award nomination for its magnitude, cementing their reputation as a first-class live act and Ones To Watch for 2022, plus a recent run of sold out UK/EU dates, Cassia have returned to their celestial home. They will be performing more shows later this year per the below, with more dates to be announced soon.

“a frisky piece of skewed indie pop – we’re hearing shades of alt-J and Glass Animals, alongside their own inimitable elements” – Clash

“Cassia are a band who have amazing intricacies to their music and are able to take that calmness and supersize it in a pop format” – Jack Saunders, BBC Radio 1 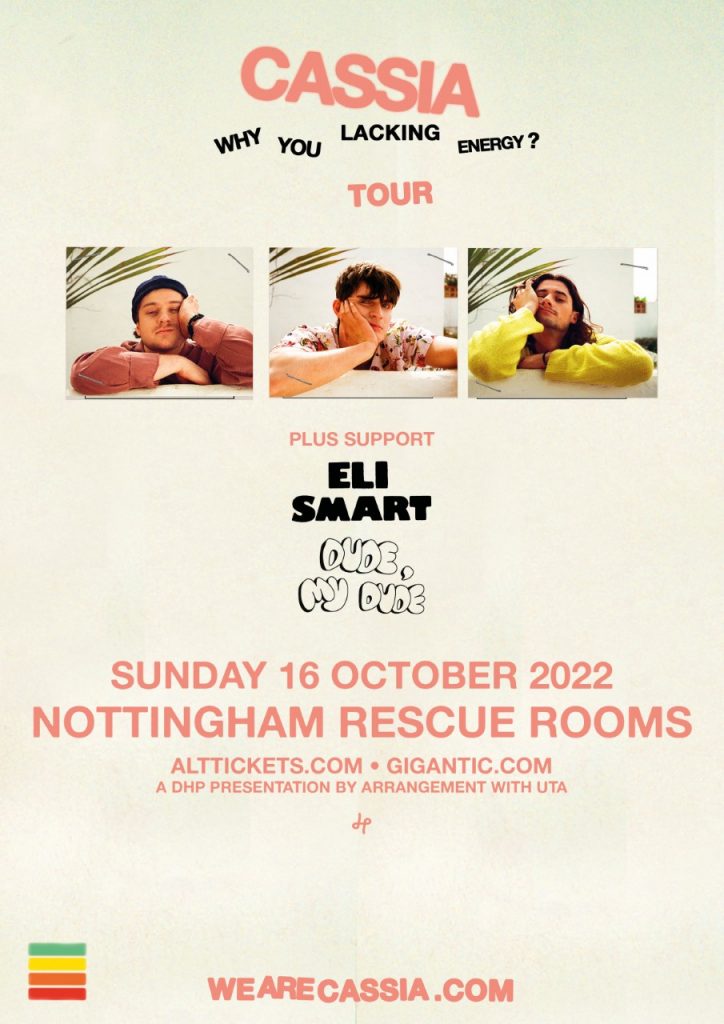