It’s hard not to smile when Cassia are in the room. Their natural charisma glows just as much as their sun-kissed sound which, as Clash described, “transforms even the dreariest of days into a feel-good carnival.” Cassia combine indie-pop foundations with main stage-worthy vocal melodies and delicately-crafted guitar work to create a euphoric sound that uplifts from the get-go. In the words of Gigwise, the music comes from a band “on a mission to spread positivity.”

“We wanted to create a feeling of vibrancy when people listen to us,” lead singer and guitarist Rob Ellis says, something echoed by his fellow bandmates, bassist Lou Cotterill and drummer Jacob Leff. Having met variously between school and the gig circuit of their home – the northern market town of Macclesfield – the trio discovered a shared love of world music. It’s an interest inspired by Rob’s family. His father and grandfather lived in Zambia for several years and both returned with a record collection documenting the sound of their travels. During his teenage years, Rob started to explore the collection in more detail – something which sparked a curiosity in listening to music from afar.

Cassia released their debut album ‘Replica’ in April 2019. One of their most popular songs, ‘100 Times Over’, was originally written when Rob was just 17-years-old, in his school music studio. “I remember messing around in the studio with my friends and not doing any maths homework,” Rob laughs. “After a lot of jamming and experimentation, ‘100 Times Over’ emerged and it remains one of our most popular songs and one our fans really love.”

Those songs quickly connected with audiences, with sold-out headline dates both in the UK and Europe. Playing to a homecoming capacity crowd at Manchester’s O2 Ritz as well as the Scala in London, the band’s large following has largely been developing through the time-honoured method of extensive touring.

Their vibrant shows have resulted in them earning a nomination for Best Live Act at the Association of Independent Music Awards alongside Idles and DMA’s. Cassia’s overflowing 2019 touring schedule included more than 80 shows and 35 festival dates (including the likes of TRNSMT, Reading and Kendal Calling). Hitting up just about every corner of the UK with consistently explosive performances, they’ve created an inimitable bond of charisma and musicianship that has helped them retain, nurture and develop their signature sound. Conquering some of Europe’s biggest stages is now something of the norm for the band.

Renowned by some of the biggest names in the business, Cassia are regularly supported by the likes of BBC Radio 1, Radio X and BBC Introducing. Annie Mac has emerged as an influential fan, first inviting them to perform at Maida Vale for Future Sounds, and later saying, “I love all of the vibes of their songs.” Her Radio 1 colleague Jack Saunders agreed, adding, “If you haven’t discovered your new favourite band yet, you might do that with Cassia.”

Cassia are now striding confidently into a new era in their career. After releasing ‘Replica’ and completing an extensive album tour, they returned in style with ‘Do Right’. Demonstrating an exciting but organic evolution in the band’s sound, it quickly became a new fan favourite as huge support at Spotify saw it race up the viral charts, while major airplay included Radio 1 and a rush of international radio. Their latest single, ‘Don’t Make A Scene’, premiered in the coveted Hottest Record slot on the Radio 1 Annie Mac Power down playlist show (covered by Clara Amfo) and quickly earned its second major airplay courtesy of Jack Saunders that same evening. The stage is now set for Cassia to ascend to the next level.

“This new batch of songs is about who we are and who we want to be in this life,” says Rob. “They’re about how we react to change and how we are affected by it. At the same time they’re about how we can all contribute and do better.” Cassia embraced the change in circumstances brought on in 2020 by temporarily moving to Berlin, building their own Casa de Cassia studio and producing their recordings themselves. “This is something we’ve always wanted to do,” adds Rob, “and it’s been helping us explore what we want these songs to sound like and dive deeper sonically. We’ve also been able to reflect a lot on what’s been happening around us and then immediately put it into music. In times of adversity we want to keep on pushing to create positive music.” 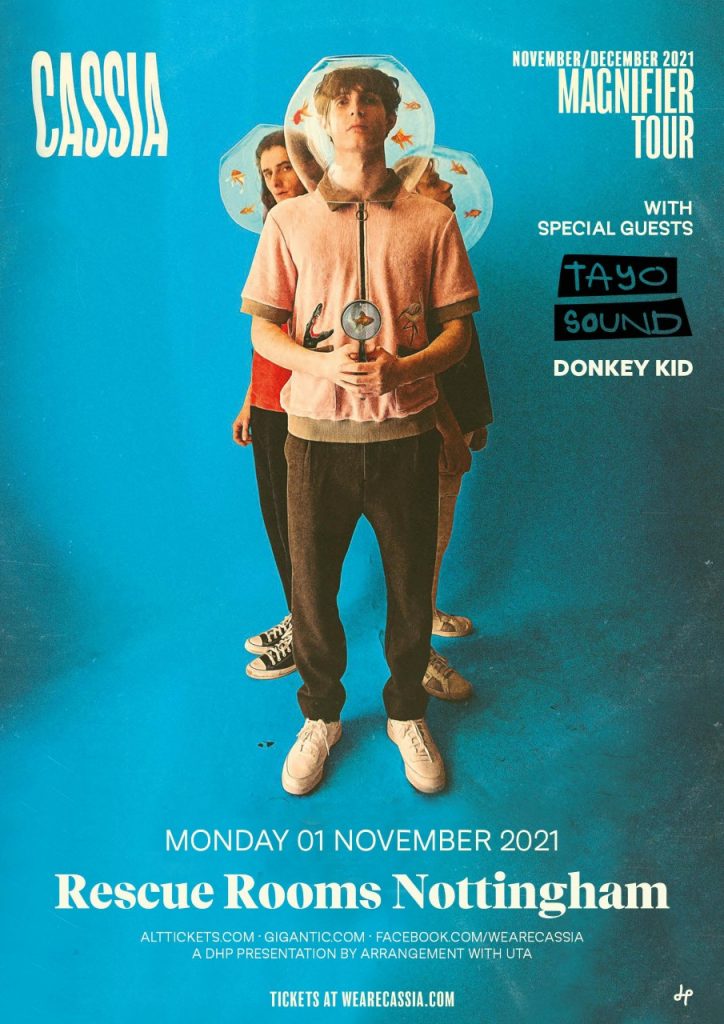