Tickets are now available for Dare at Rescue Rooms.

UK Rock band DARE are pleased to announce Troy Redfern (aka The King of Slide Guitar) as their very special guest on their forthcoming 12-date October 2022 UK tour.
The news follows hot on the heels of Troy supporting When Rivers Meet’s UK tour on their April and May UK tour, and dovetails with Troy’s new studio album slated for release this summer.
Hailed by Rock and Blues Muse as part of their “Best of British: 15 UK Blues Artists to Check Out Today,” the influential music website had this to say about Troy – “His performances are passionate and intense, and while his style certainly references its delta blues roots, his delivery pulls it into the 21st century through a swamp of distortion and contemporary rock n’ roll aesthetics.”
Special Guest: Troy Redfern
DARE’S highly anticipated October tour follows the April 1st release of their critically acclaimed 10th studio album Road To Eden that featured the rock radio hit Born In The Storm. The single is available to stream via https://levelmusic.lnk.to/BornintheStorm. The album is available to order on CD here or digital here.
Road To Eden follows Dare’s critically acclaimed albums Sacred Ground (2016) and Out Of The Silence 2 (2018). Both albums reached Number #1 in the Amazon Classic Rock Charts in four countries including the UK, Germany, Italy, and Spain. Dare entered the top #5 in the official UK Rock charts, number #6 in the US Amazon Classic Rock Charts and Number #1 in Japanese rock imports. Road To Eden is destined to be another  odern DARE classic. Produced by their lead singer songwriter Darren Wharton (ex-Thin Lizzy) at his studio the majestic mountains of North Wales. The new album has a harder rock edge than previous albums, whilst still retaining the atmospheric sound, and anthemic melodies that has become the band’s signature trademark. Road To Eden features ten brand new beautifully crafted songs that captures the very heart of DARE. With a full headline UK tour set for the UK in October 2022, plus dates in Spain, Scandinavia, and Germany, it’s going to be an exciting year for the band. “We wanted to write an album that translated well to live performance,” says Darren. “Road To Eden has some great anthems, energy and power. We can’t wait to play the new songs live.”

With previous DARE albums now having well over 4 million streams on Spotify, it’s clear that for the growing army of DARE fans, the wait is nearly over, as they prepare to join DARE on The Road To Eden. 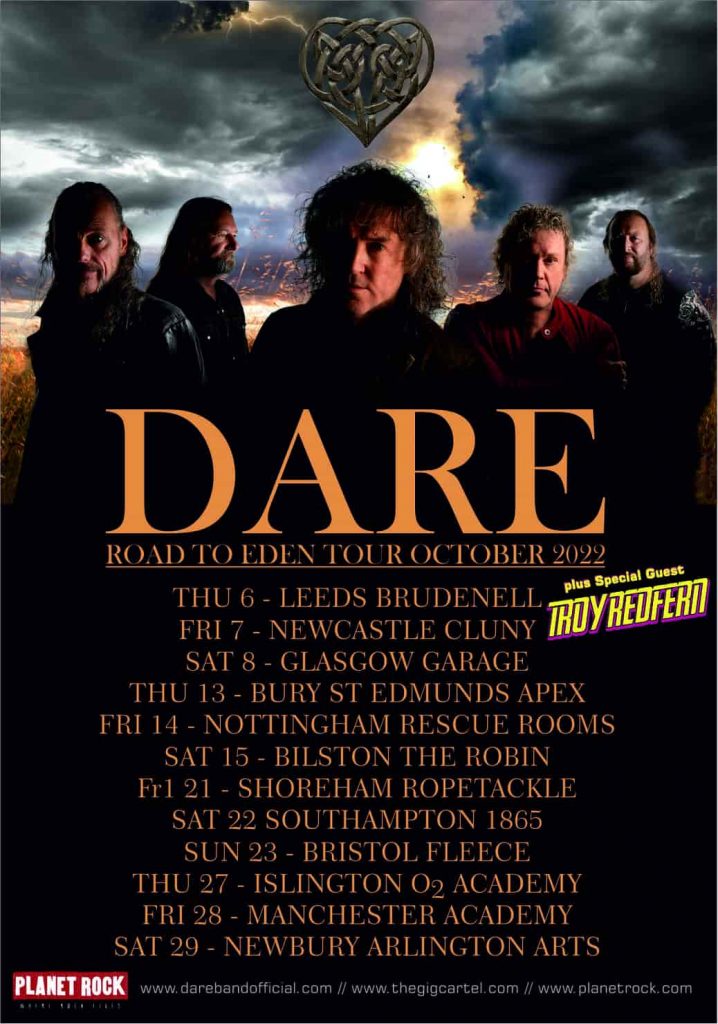