Multi-talented sibling duo Everyone You Know have announced a 13-date UK headline tour in November and December. The tour will follow the release of their highly anticipated EP ‘Just For The Times’ on 1st October, which will be available on all DSPs as well as CD and cassette formats. You can pre-order the EP here.

Tickets for the tour will go on pre-sale to fans on Monday 13th September at 6pm and will be available on general sale on Thursday 16th September. The tour kicks off at Newcastle The Think Tank on 16th November, culminating in London at XOYO on 4th December.

EYK recently released their single ‘Radio’, which gave listeners an insight into what to expect from the forthcoming EP; a rich embodiment of EYK’s sonic diversity delving into the pairs’ journey over the last 18-24 months. The project provides a soundtrack to the highs, the lows, the nostalgia and the pent-up energy over lockdown, skewered in pin-sharp rhymes, layered over precision tooled bedroom beats. The EP features previously released singles including ‘Just For The Times’, When The Sun Comes Up’ ‘Higher’, and ‘Charlie’, all which will all be available as an instant-grat if you pre-save the project, along with ‘Radio’.

The release follows the bands momentous single ‘Just For The Times’ alongside Joy Anonymous which amassed almost 2 million streams. The track was also playlisted on BBC Radio 1, as well as spun on Love Island and Rugby League Final.

Everyone You Know have had a rapid rise to success in a short space of time, amassing over 100 million worldwide streams, sold out tour dates, a main stage festival performance and a stint as UK brand ambassadors for Reebok. Fusing hip hop, garage, dance and punk, the London based duo cite J Dilla, Dr Dre, The Streets, Wu Tang Clan and Kano amongst their musical inspirations. Honing their signature sound, the pair have built a cult following with tracks such as ‘When The Sun Comes Up’, ‘Our Generation’, ‘She Don’t Dance’ and ‘The Drive’. The pair have garnered key tastemaker support along the way from the likes of Annie Mac (headlined AMP at Old Blue Last), Jack Saunders (Radio 1 Maida Vale Session), Steve Lamacq (6Music Session), BBC Introducing, NME, Sunday Times Culture, Complex and The Line of Best Fit positioning themselves as one of the most exciting and innovative new talents to come out of the UK. 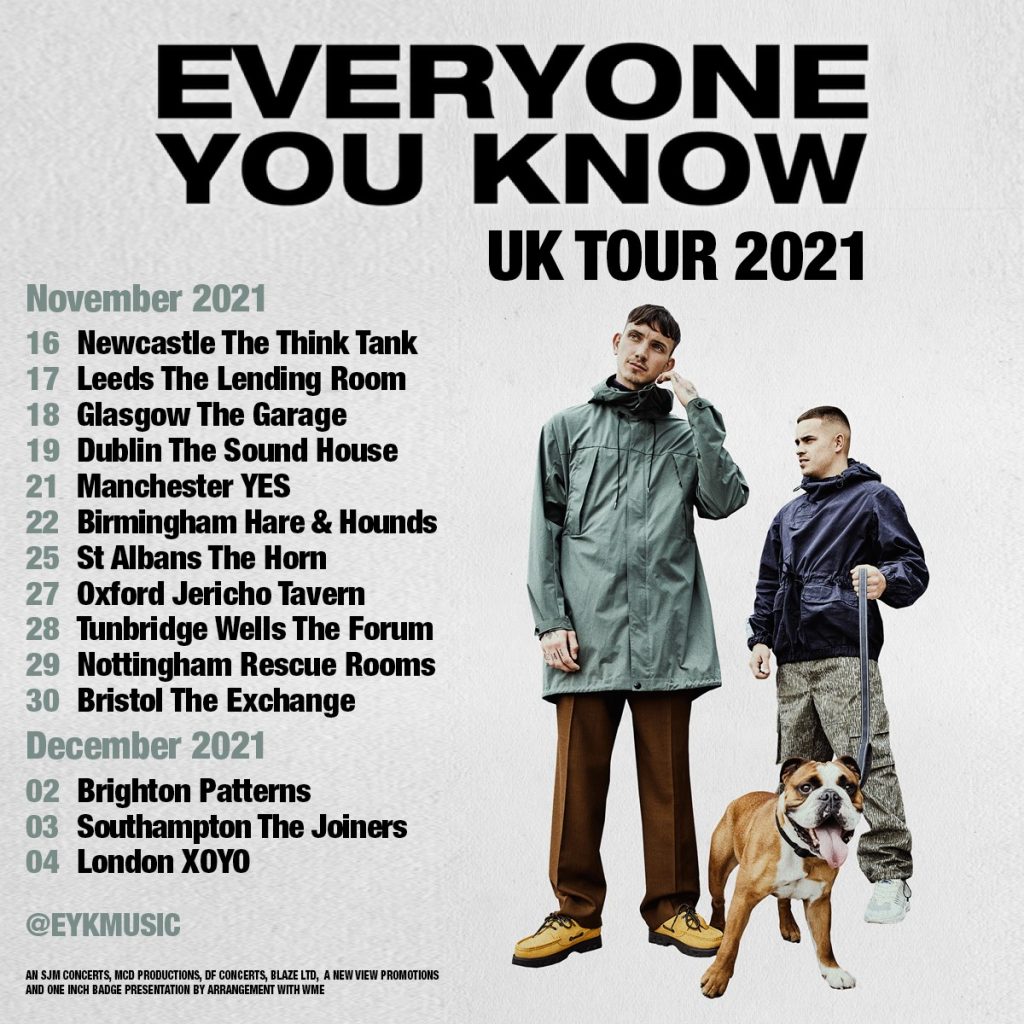 Everyone You Know ON SPOTIFY