After several years on the cover circuit with retro indie band Ace Face, Adam Thistlethwaite and Baz Mills went their own way to write original hard rock n’ roll music in 2009. Recruiting Adams younger brother Alex, and old school buddies Adam ‘Bowzer’ Bouskill and Carl Cochrane the fivesome set out to drink some beers and play some music billed as Massive Wagons. High energy and high volume were the order of the day.
The lads quickly earned a reputation in the small towns of northern England for being a wild, ballsy and LOUD old school rock n’ roll band in a scene where high slung acoustic guitars and songs about daffodils were trendy. As such, the biker scene in-particular embraced Massive Wagons and the band were booked for more rallies and AGMs than you could shake an oily rag at. The ‘Wagons’ wisely learned that to make money on ‘the circuit’ you had to have a repertoire of classic rock covers at the ready, so live sets were adaptable blends of covers and originals which enabled Massive Wagons to earn money as a cover band but also work on their own songwriting and delivery, the best of both worlds.. A 5 track EP creatively titled ‘Sniff The Riff’ was circulated, ears were pricked, the wheels were in motion.
By 2011 enough songs had been written to record the ‘Fire It Up’ album, a rough and ready affair though good enough to be picked up and released through Copro Records in the UK. Around this time the band decided to phase out the cover circuit and focus on shorter, original sets. First landing showcase slots in Preston, then Manchester and eventually London with everywhere in between and the band spread the word very organically. There were no short cuts and dues were paid the old way.
In 2012 Massive Wagons won a live competition to perform at Hard Rock Hell festival in Wales. The bands show-stealing set on that day won a lot of fans over and the seeds of a small but loyal following began to take root. Despite the efforts of then manager Nick Preece, the band struggled to land support slots for larger touring acts so a DIY attitude was adopted, Massive Wagons hit the
road right out of the gate as a headliner, booking their own shows and selling tickets however they could and a tough couple of years up and down the UK motorways followed.
Sophomore album ‘Fight The System’ was released in the summer of 2014 though Off Yer Rocka Recordings, with the title track and ‘Red Dress’ rotated heavily on the underground radio scene. The cult following began to grow as the Wagons garnered a reputation as ‘the peoples rock band’, aided by Baz Mills earthy working man lyric style and the amiable nature of the band. Third album ‘Welcome To The World’ also released through OYR in April 2016 and further cemented the Wagons sound, bringing guitars to the fore and a distinctive trademark sound began to emerge. Tracks like ‘Ratio’, ‘Tokyo’ and ‘The Day We Fell’ showcased the songwriting chops of Mills and Thistlethwaite backed by an increasingly tight unit. Both albums were recorded at Axis Studio, Doncaster with producer Matt Elliss, who worked with British rock stalwarts Black Spiders/Terrorvision and a strong working relationship was struck.
Massive Wagons were still playing the same small clubs of the UK on the Welcome To The World tour that followed, but they were selling them out for the first time. This momentum increased through the following year as the wider industry began to take notice, highlighted by the fact Massive Wagons were invited on their first full support tour by Ginger Wildheart on his 2016 solo UK tour and
for the first time putting them in front of a fresh audience, previously oblivious to their existence.
The first real shift in gear was the release of Rick Parfitt tribute song ‘Back To The Stack’ in Febuary 2017. Self released and promoted, the song was picked up by national radio and received nationwide airing and the wider industry was forced to sit up and check out the band with the daft name. Further touring followed, and the bands only line up change to date happened in late 2017, with Carl Cochrane leaving and Stevie Holl joining as second guitarist.
In late 2017 Massive Wagons signed to Earache Records and recording for the first album under the new label began immediately. In a testament to Massive Wagons years of hard work on the road, ‘Full Nelson’, released August 10th 2018 hit the Top 20 Official UK Album Chart, peaking at No. 16.
The Full Nelson tour lasted 18 months and had the guys hitting Europe for the first time, playing an arena tour with Lynyrd Skynyrd and selling out headline shows the length and breadth of the nation. Support tours with Thunder, The Dead Dasies and The Wildhearts kept the band on the road through 2019 and writing the follow up was completed by the end of the decade.
‘House Of Noise’, the bands fifth studio album was recorded with Colin Richardson and Chris Clancy at Backstage Studio, Derbyshire in January 2020. Featuring Massive Wagons strongest songs to date the album is highly anticipated by fans and press alike. It is released 17th July 2020. 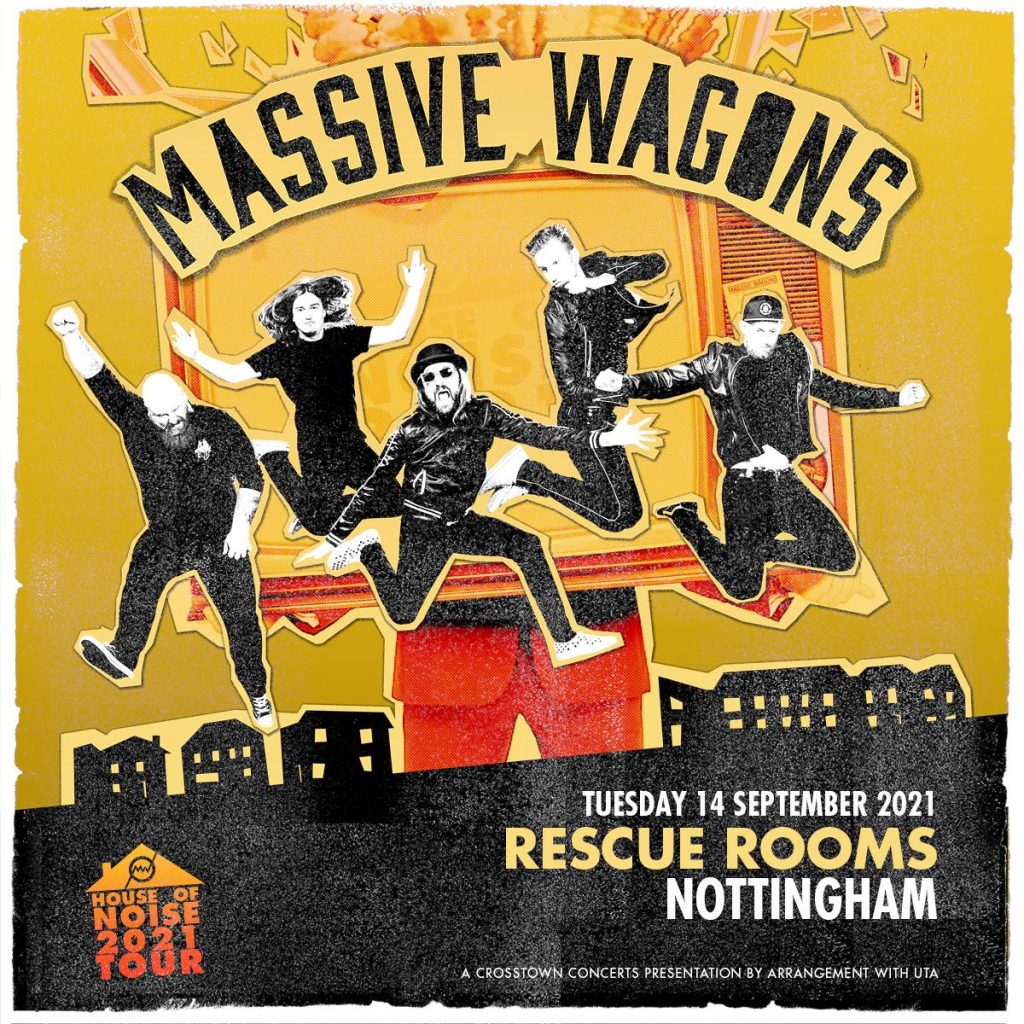