Tickets are now available for Russell Dickerson at Rescue Rooms.

Ahead of a huge show at The O2 Arena in London for C2C Festival this weekend, multi-platinum selling country star Russell Dickerson has announced he will return to the UK for a run of dates this Autumn. The tour includes a date at London’s Electric Ballroom on October 12th.

Currently in the middle of his US ‘All Yours, All Night’ headline run, which included sold-out dates at New York’s Irving Plaza and Nashville’s iconic venue The Ryman, the UK tour comes in celebration of his acclaimed 2020 sophomore album Southern Symphony and follows ‘She Likes It’ Russell’s cross-genre collaboration with Jake Scott. “It’s time to take the All Yours All Night Tour WORLDWIDE!!! I can’t wait to turn up with all my U.K. and Irish fam this fall!” Russell said of the dates. Watch the video for ‘She Likes It’ Here.

Multi-platinum Nashville-based singer, songwriter, and multi-instrumentalist Russell Dickerson has established himself a prolific songwriter and powerhouse showman through memorable high-energy performances and eloquent songcraft spiked with spirit. His gold-certified full-length debut album, Yours, bowed at #5 on the Billboard Top Country Albums Chart and #1 on the Emerging Artists Chart. Ultimately, it yielded three consecutive #1 smashes, including the triple-platinum “Yours” (christened “one of the hottest wedding songs of the year” by The Knot), platinum “Blue Tacoma,” and platinum “Every Little Thing.” Nominations piled in from the Academy of Country Music Awards, CMT Music Awards, and iHeartRadio Music Awards. Among his 2020 highlights, he received an ACM nod in the category of “Best New Male Artist of the Year.” He has electrified audiences on tour with Thomas Rhett, Florida Georgia Line, Darius Rucker, Lady A and Kane Brown, in addition to headlining sold out venues everywhere. Sustaining a fervent following on social media (fondly referred to as his “RD Fam”), he launched his YouTube show, “This Is Russ,” taking fans deeper into his world. In 2020, he released his second full-length album, Southern Symphony [Triple Tigers], a long-awaited masterful compilation, layered with hummable country anthems and pop flare. Led by the platinum-certified #1 single “Love You Like I Used To,” which spent a record-breaking 21 weeks on Billboard Country Airplay’s Top 10, his sophomore release tells his story like never before. The record’s eloquent songcraft and airtight playing showcases all sides of his beloved personality and the evolution of Russell Dickerson— doting husband, self-proclaimed “regular dude,” rad dad, and bonafide country music superstar. Russell is currently playing sold-out shows across the country on his headlining All Yours All Night tour, followed by a newly announced UK leg this Fall following fan demand. 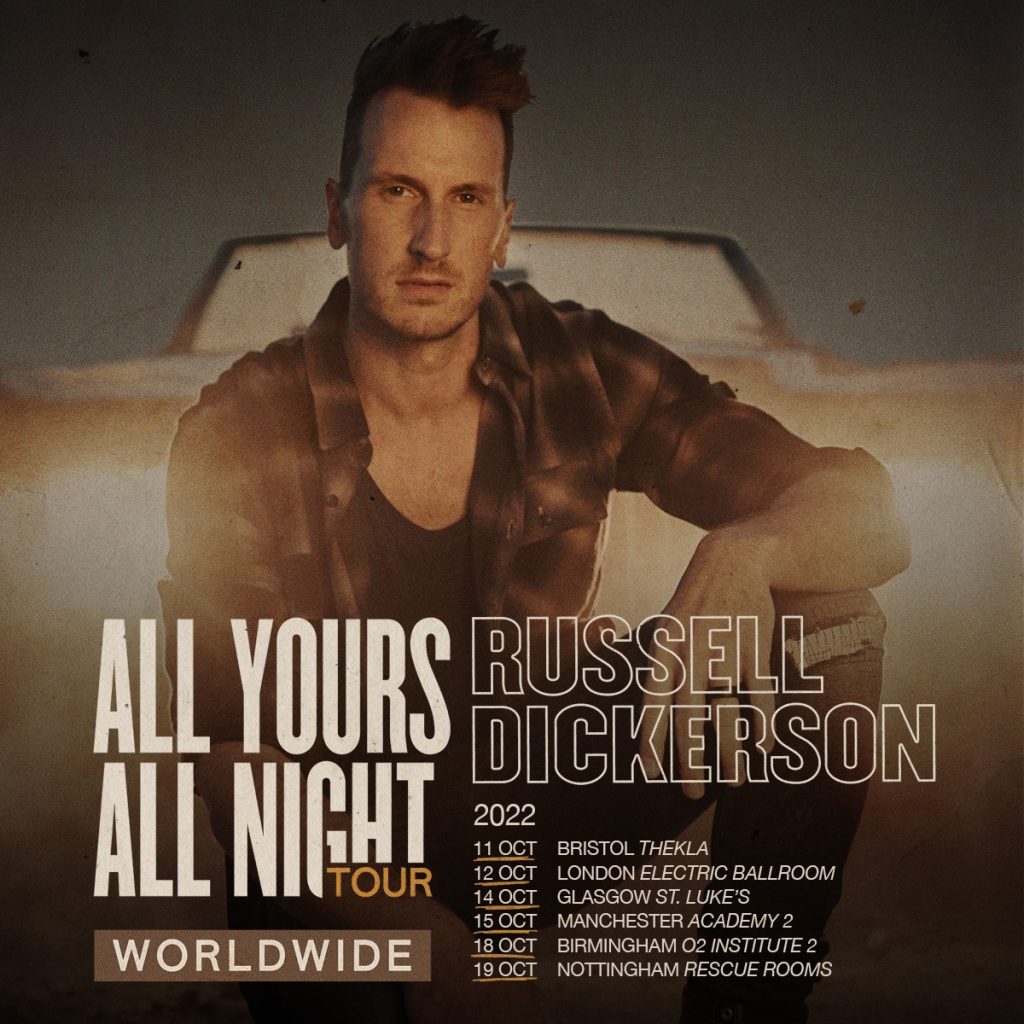