Reset the counters! Toby Jepson is back with WAYWARD SONS his brand new band and Ghosts Of Yet To Come, his first new album in over 20 years.
After the incredible success of Little Angels, a number one album, millions of records sold, massive sell out shows and numerous hit singles, Toby has been busy these past years in movie work, performing with Fastway, Gun and Dio’s Disciples and producing albums for numerous bands (Saxon, Fastway, Virginmarys).
His heart however, is always in writing and performing and so the concept of
WAYWARD SONS was born – a new band, built for playing live, a new direction
with Toby’s songs centre stage and a new album, signed to Frontiers Music SRL, with all the hallmarks of a great debut.
Wayward Sons, handpicked by Toby are Nic Wastell (bass, Chrome Molly) Phil
Martini (drums, Spear Of Destiny, ex Quireboys, Joe Elliot’s Down and Outs) Sam
Wood (guitar, a real new gunslinger from Treason Kings) and Dave Kemp (keys, ex
Little Angels touring band and long time sideman to Toby). GOYTC was written in a
live band situation, a first for Toby
‘’I decided to get out of my comfort zone, new players, no ‘been there done that’ and
it totally worked’ says Toby. 26 songs were written in a series of rehearsals at Peter
Gabriel’s Real World Studios and 14 were then taken into Vale Studios in
Worcestershire and recorded in a live band situation with Toby co producing with
Chris D’adda.
The killer tunes that make up Wayward Sons debut include ALIVE – the opener,
heavier and darker than Toby has ever been, with one of the great British rock voices out front over a sledgehammer riff and a lyric that cuts to the bone.
GHOST channels the spirit of rebellion into three minutes of melody and hard riffing, taking on current issues such as alt truth and bullshit that we are all fed daily – political? You bet, this music is on the nail – uplifting and edgy.
KILLING TIME and UNTIL THE END are both songs that capture the crazy way
21st century life is lived – always questioning lyrically but musically capturing the
energy and spirit of a band that rolls away the years and competes with the hottest
around.
Passionate, honest music made by passionate honest musicians who have come
together to create rock music that reflects their heroes from the ‘70s and ‘80’s –
modernity through homage…..Wayward Sons. 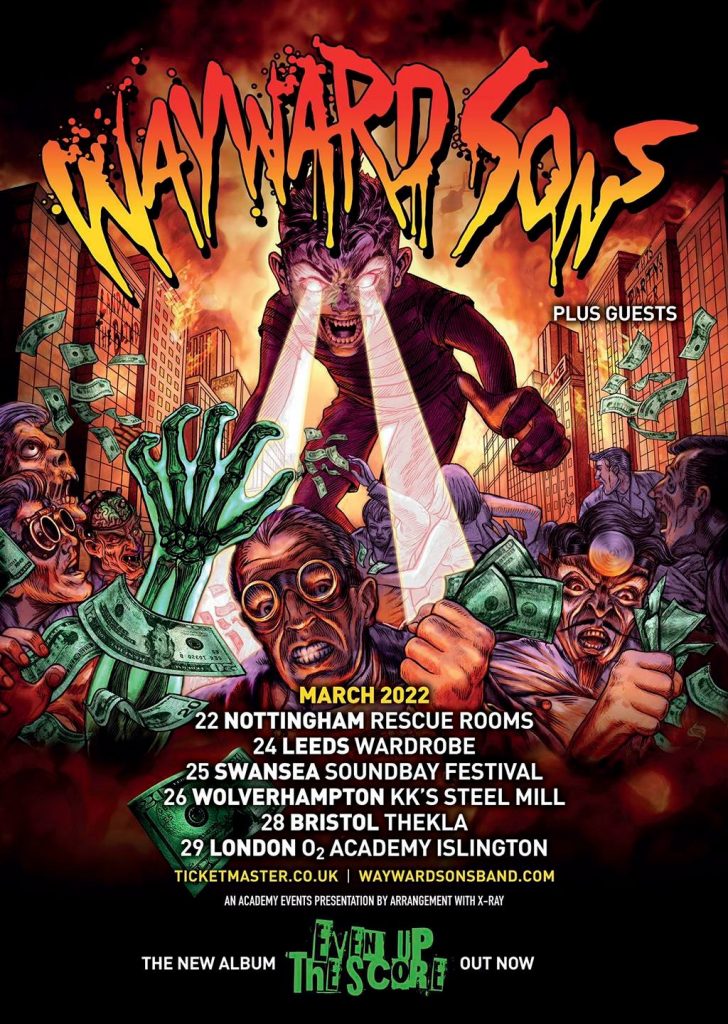