Tickets are now available for We Are Scientists at Rescue Rooms.

Hot off the heels of dropping their fresh new indie pop hit ‘Operator Error’, We Are Scientists announce details for the new album ‘Lobes’ today, alongside over 25 UK and European live dates for early 2023.

‘Lobes’, out 20th January 2023 via 100% Records, will be the legendary New Yorkers’ 8th ofﬁcial studio record. The album is expected to see the lovable and dynamic duo at their most playful and creatively free, continuing to open up the band’s sound to more of Chris and Keith’s own input on production.

Supporting the new record, the band will be back on the road touring the UK and Europe extensively throughout February, March and April 2023. New dates announced today for the ‘Show Lobes’ tour include a London headline show at the recently relaunched KOKO in Camden on 3rd March, and round off a run of 11 dates around the UK and Ireland. Limited pre-sale tickets will be available this Wednesday 28th September to UK fans who have pre-ordered the album, before going on general sale Friday 30th September.

The upcoming new album follows on from the weighty indie rock masterpiece of HUFFY in 2021, and whilst the origins of songs written for ‘Lobes’ began around the same time, the impression so far suggests they grew into an entirely different musical universe. The album’s lead single ‘Operator Error’ is a promising ﬁrst taste of the fresh direction expected on ‘Lobes’ and has already received praise in the UK from the likes of the BBC and NME – listen here.

Starting by introducing the curious album title, singer Keith Murray said: “Lobes is the name of a cereal of black spheres invented by Chris Cain (don’t ask). Obviously, the record has little to do with breakfast, but I loved the associations that the word has with cerebral biology, and the evocation of sci-ﬁ, and a sense of something both fundamentally human and utterly unknowable. The word “lobes” makes me think of the body horror ﬁlms of David Cronenberg, but also of the chatty comedies of manners of Whit Stillman. I really love the reaction it evokes in people: everybody knows the word “lobes,” but for whatever reason, being challenged to deﬁne it consistently scares them, or angers them, or makes them laugh, or makes them tell me to “shut up.” What a great reaction to such a benign word. It’s also pretty fun to say. Lobes.”

‘Lobes’ by We Are Scientists is due out 20th January 2023 via 100% Records. Pre-order the album for exclusive pre-sale tickets to the ‘Show Lobes’ UK Tour, taking place Feb-Mar 2023. 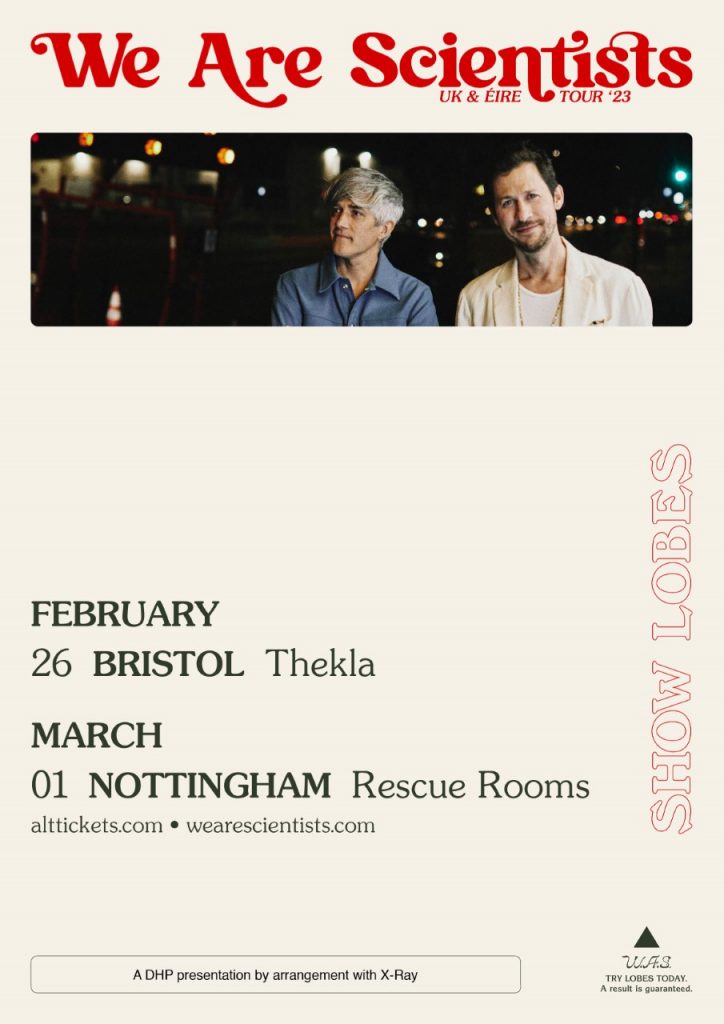 We Are Scientists ON SPOTIFY